#NotATarget: The lives of health workers in Gaza must be protected 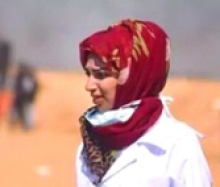 PSI urges all affiliates to call on the governments of their countries to take immediate action to stop the targeting of health workers in conflict zones in general and Gaza in particular. Health workers are #NotTargets. Public Services International is leading an online campaign to stop the killings of health workers in Gaza. Twenty-one year old nurse Razan al-Najarr was killed on June 1 by an Israeli sniper.

Latest update 17/07/2018 –  The Director-general of the International Labour Organisation (ILO) has replied to PSI’s recent letter urging the ILO to condemn the attacks on health workers, promote the unconditional protection of the lives of health personnel and emergency units and call on Israel to fulfil its obligations to the civilian population. In his letter, Guy Ryder, ILO Director-General, assures PSI of the “ILO’s own significant concern as regards the extremely serious conditions of workers in the occupied Arab territories including Gaza”.  M. Ryder commends PSI for its long-standing efforts to ensure the fullest safety for health workers adding that the ILO is strongly committed to supporting dialogue and a joint search for solutions which will effectively bring about decent work in the occupied Arab territories.

21-year-old Razan al-Najjar. recently graduated from nursing school and was a volunteer with the Palestinian Medical Relief Society (PMRS) when she was killed by an Israeli sniper on 1 June.

She was one of “more than 223 paramedics who were targeted in the field” whilst delivering ambulance and emergency services as documented by the General Union of Health Services Workers - Gaza (GUHSW), a Palestinian affiliate of Public Services International (PSI), over the last two months alone.

“This is unacceptable.  The state of Israel must respect health workers. I call on all legitimate authorities to denounce this heinous act and to pressure the Israeli Defence Forces to cease targeting health workers.”

“Emergency workers, including health personnel, should never be military targets.  We call for the unconditional protection of the lives of health personnel and emergency units in accordance with international humanitarian law and the Fourth Geneva Convention."

“We need to enhance our efforts to ensure the protection of our frontline health workers”,stated Dr Gerald Rockenschaub, Head of the World Health Organization (WHO) office in the occupied Palestinian territory in the aftermath of the murder of Ms. Al-Najjar. This requires governments across the world to demand that Israel respects its obligations to respect the sanctity of lives of workers delivering emergency services and the human right to health.

Ms Pavanelli raised the issue in a recent letter to Dr Tedros Ghebreyesus, Director-General of the World Health Organization, seeking his support and active intervention to ensure unconditional protection of the lives of health personnel and emergency units in the occupied Palestinian territories.

At its 20th meeting, on 17-18 May 2018, the PSI Steering Committee unanimously approved to support and solidarize with the victims of the Great March of Return and their families, as well as those who peacefully protested the US Embassy transfer to Jerusalem, on 14 May 2018.

PSI voices its strongest rejection on the excessive use of force against unarmed civilians, including women, children and senior citizens, and regrets the huge number people killed and injured by Israeli security forces. Thus, PSI supports UN Secretary-General António Guterres’ call for an independent inquiry into the violence, which could be flagrant violations of international law.

PSI calls on all affiliates to write to their respective Foreign Minister, to raise-awareness and pressure the governments of their countries to call on the WHO, the UN Security Council and the Israeli government to take action to stop the targeting of health workers in conflict zones in general and Gaza in particular. Health workers are #NotTargets.

The lives of health workers in Gaza must be protected

I am writing to you on behalf of [insert your organisation name], an affiliate of the Public Services International (PSI), which represents more than 20 million workers in 164 countries, to express serious concerns about the targeting of health workers in Gaza.

21-year-old Razan al-Najjar was a member of PSI’s affiliate the General Union of Health Services Workers, a registered nurse and volunteer with the Palestinian Medical Relief Society (PMRS) when she was killed by an Israeli sniper on 1 June 2018. This is unacceptable. The state of Israel must respect health workers.

Health workers in Gaza and conflict zones across the world save lives and take care of the wounded, by providing emergency services. Their safety and security should be safeguarded as they perform a critical humanitarian role. It is unacceptable for them to be made targets by security personnel. This is a violation of the Fourth Geneva Convention.

On behalf of [insert your organisation name], I call on you to take all necessary steps to ensure the immediate cessation of attacks on medical and health personnel in Gaza, including publicly condemning the attacks and calling on the Israeli government to fulfil its obligations to the civilian population in accordance with the international human rights law.

PSI and its affiliates will be closely monitoring the situation.

[Your name]
[Your organisation name]

PSI letter to WHO Director-General