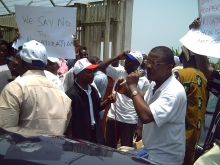 Nigeria is privatising the public power holding company, and employees were forced at gunpoint to listen to speeches from the Minister of Power and the Minister of Labour. "Is Nigeria still a military dictatorship?" asks PSI in a letter to President Goodluck Jonathan.

Is Nigeria still a military dictatorship?

We were under the impression that the dictatorship ended a number of years ago, and that Nigeria is on the path to building democratic institutions.

However, we have received information that, in this past week, soldiers forced staff members of the public Power Holding Company of Nigeria (PHCN) at gunpoint to listen to speeches from your Minister of Power and your Minister of Labour.  We understand that you intend to swiftly impose the complete privatisation of Nigeria's electricity system and that the energy workers are opposed to this sell-off of public services.

Mr President, it is imperative, in the name of all Nigerians, that you stop this privatisation before it is too late, and that you examine the real experiences of dozens of countries that demonstrate that privatisation costs citizens much more than publicly-provided energy services.

Energy privatisation doesn’t work
Public Services International (PSI) is the global federation of trade unions in the public sector.  We were formed in 1907 by workers in energy and municipal services.  Some 20 million workers in 650 unions from 150 countries affiliate to PSI today.

Our experiences across the world indicate fundamental problems with the privatisation of energy.  These network services are highly capital-intensive and have unique characteristics which market theories do not account for.  Most privatisations have failed to deliver on almost all counts.  We wrote to you on these same issues on 24 December 2010.

These large privatisations are known for opening the door to corruption, as so much money is involved.  They are also known to raise prices for normal users – families, small businesses, etc. – because the pursuit of corporate profit is relentless.  Privatisation does not bring in new investment capital, it just repackages loans and borrows more expensively with sovereign guarantees from your government.

Take action for the common good
Your government seems unwilling to have a full and open debate on the subject.  It appears as if decisions have been made and that you will use whatever means necessary, including military might, to force through policies which will fail the public interest.  The excessively short timelines for the technical and financial review of bids also reveals a flawed process.  As well, Nigeria’s experiences with privatisation in other sectors should raise concern and force a review of this scheme.

Regrettably, corruption and violence are close partners, and it is too often workers and their families who suffer.

Public Services International will take every opportunity on the international stage to raise our concerns that the privatization of the Nigerian public electricity network is being forced at gunpoint.

We urge you, in the name of all Nigerians, to reconsider the path which you are taking.  You must halt this ill-conceived privatisation agenda and fix the problems in Nigeria, with the full input of Nigerian citizens, including public energy workers.  Help eliminate corruption and build the country which Nigerians deserve.  Quality public services advance the common good.