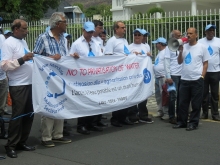 PSI affiliates in Mauritius launch joint campaign following announcements by the Public Utilities Minister that privatisation of the Central Water Authority was unavoidable and, more recently, that water rates will be increased. The increase could be as high as 20-30% according to some reports.

The possible privatization of the Central Water Authority (CWA) in Mauritius has been on the cards for some time. The Government of Mauritius signed in February a Reimbursable Advisory Services (RAS)agreement for the improvement of the water supply throughout Mauritius with the World Bank (WB).

Further reports in the press suggest that the World Bank is recommending a public-private partnership where 80% of income would go to the private partner.

In a statement to the press the Minister of Energy and Public Utilities, Ivan Collendavello publicly announced that water rates will be increased stating that “the rise in the price of water is inevitable as Mauritius is one of the countries in the world where water is so cheap.”  He also explained that this increase, is an essential measure to empower the Central Water Authority (CWA) to carry out its mission effectively. Ivan Collendavello had already previously stated that privatization of the Central Water Authority was “unavoidable”.

The increase in rates could be as high as 20-30% according to current reports.

PSI affiliates in Mauritius, the Government Services Employees Association (GSEA), the Federation of Parastatal Bodies and Other Unions (FPBOU) and the Local Authorities Employees Union (LAEU) jointly launched a campaign against privatization of water services including an awareness-raising Conference on “Quality Public Services and Water Privatization” on 15 September followed by a march along the streets of Port Louis, the capital  city of Mauritius.

“Privatisation has not been successful in countries where it has been enforced. Vulnerable households would not be safeguarded and non-payers would be cut off indiscriminately. In most countries, privatisation has encountered strong political opposition." explains Radhakrisna Sadien, the General Secretary of the GSEA in an interview with News on Sunday.

“We have decided to keep up the pressure until Government decides to abandon its project of privatizing,” continues Sadien.

PSI has produced research showing that PPPs are an expensive and inefficient way of financing infrastructure and services, since they conceal public borrowing, while providing long-term state guarantees for profits to private companies. PSI fully supports its affiliated organisations in the country.