Lagos water Workshop: "claims that PPP is not privatization should not be believed” 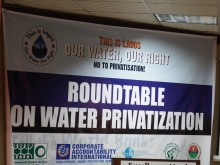 A heightening campaign among trade unions is pushing back against the Adiyan Phase II Water Scheme which constitutes a major threat on the security of water of Nigeria’s capital.

On Friday, February 2, 2018, leaders of PSI affiliates in Nigeria, the Environmental Rights Action (ERA), met at a roundtable to discuss the matter in detail and draw up the plan ahead.

The people of Lagos “have made their strong opposition to water privatization abundantly clear for years,” the group said, adding that “despite the World Bank Group’s own research showing a high rate of failure for privatization projects in the water sector,” it appears to be a main proponent in this new move by their government.

ERA says if the Governor of Lagos, Akinwunmi Ambode awards the contact to Veolia, Abengoa and Metito, to manage water in Lagos for the next twenty-five (25) years, then he will be endangering the very lives of his people.

These three corporations have a global track record of abuse and mismanagement,, with some of them involved in bribery investigations spanning three countries and workers facing labour crackdowns immediately they take over the management of sectors in countries.

The roundtable attendees expresed their frustration with the World Bank’s continuous pressure since 1999 to promote private sector involvement in Lagos and at the national level, despite its own research that shows that privatization in many spheres has largely failed.

“The false notion that privatization is the only way to solve Lagos’ water crisis has contributed to the deterioration of our water infrastructure by inhibiting the adoption of other, more effective policies.”

Civil society groups in Nigeria, following a meeting of World Bank Group Managing Director and Chief Financial Officer, Joaquim Levy with Deputy Lagos State Governor, Dr. Idiat Adebule, are also frustrated by the failure of Mr. Levy to respond to or even acknowledge receipt of a letter it sent to him requesting transparency in the World Bank Group’s plans for their water sector.

The roundtable discussions, concluded that: