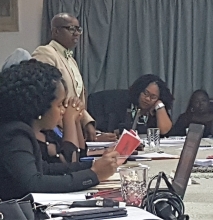 Thirty-one women trade union activists, nine of them young workers, representing 15 affiliates, attended the 2018 SUBWOC in Castries, St Lucia, on July 2, under the theme “There can be no social justice without gender justice.”

On the occasion, SUBWOC members pledged to use their influence and power to build the capacity and ability of women to function effectively in their unions and in society, and reaffirmed the central role of gender justice and women's rights in transforming the lives of women, families and communities.

Providing quality public services that ensure education, health services, care to children, the elderly and persons with disabilities, transportation, modern communications, free at point of delivery and accessible to all, is what is at the centre of development of Caribbean peoples and their countries: putting people over profit.

Public services unions have made important contributions to these developments, through social dialogue and collective bargaining. There have been many advances, but so much more needs to be done. In a 2016 synthesis report on gender assessments throughout the Caribbean, the Caribbean Development Bank (CDB) revealed, “the Caribbean region continues to battle with persistent gender inequalities”. As one Caribbean sister put it, “seems like we making two steps forward, one step back. Every time we think we’re getting somewhere, making some advances, we get a lot of push-back.”

There has always been a tradition of women in leadership in public services unions in the Caribbean. Some have been in the forefront, others working quietly – and not so quietly - in the background. These women activists are now more visible and are receiving the recognition that they truly deserve. SUBWOC members applauded the increased numbers of women who are stepping up to take on leadership roles in their unions, whether it be as shop stewards, members on national or general councils or executive members.

The SUBWOC recognised and congratulated those attending their first SUBWOC (representatives from five affiliates) and wholeheartedly extended their support and pledged solidarity. There was a special welcome for the nine young women activists who participated, with clear signs that they will be mentored by some seasoned activists.

“The PSI Women’s Committee will take responsibility for leading the process of gender mainstreaming in PSI.”

In addition, SUBWOC members took careful note of the important role that women’s committees and networks at the national and (sub)regional levels can and must play in monitoring the implementation of the SDGs, focusing on the central theme of gender equality.

The meeting commended those men in the trade union movement who are feminists and called on men in trade unions to do more to support and work for gender equality and gender equity.

With examples of how they had built alliances with civil society organisations that share the quest for gender equality and gender equity, affiliates showed that it is possible to engage the public and increase their allies in society. Through hard work and high-quality interventions, it is possible to influence decision-makers.

SUBWOC also learnt more about, and discussed (a) Intersectionality analysis and its use in trade unions; and (b) Gender Responsive Public Services (GRPS). Members requested more information and training on these emerging issues.

The SUBWOC noted and endorsed activities for 2018/2019 that focus on pay equity, the health and social services sector, eliminating gender-based violence, persons with disabilities.

Read more about the key outcomes from the meeting here.