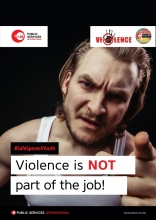 The United Nations designated the theme of International Youth Day 2018 as “Safe Spaces for Youth”. The UN explains that “without the existence of safe space, youth may feel intimidated to freely contribute to the community".

Young Workers in Public Services demand: “violence is not a part of the job”
To build safe spaces for youth, one must be safe at work!
Say “yes” to an international convention against violence and harassment in the world of work!

The United Nations designated the theme of International Youth Day 2018 as “Safe Spaces for Youth”. The UN explains that “without the existence of safe space, youth may feel intimidated to freely contribute to the community. When youth have safe spaces to engage, they can effectively contribute to development, including peace and social cohesion.”

In 2017, Public Services International (PSI) reiterated that Young Workers are among the most vulnerable targets for violent behaviours in our societies, and particularly at the workplace. Labour markets with deeply entrenched unemployment, high levels of precariousness and scarce opportunities, frequently forces young workers to close their eyes to the violence and harassment endemic in workplaces to keep their positions. The same applies to other vulnerable groups such as women, minorities and people discriminated for their faith, sexual orientations or origins.

PSI General Secretary Rosa Pavanelli says: “The Weinstein scandal and the #metoo movement came as a brutal awakening to remind us that overt violence remains the tip of the iceberg.  This should not overshadow the other forms of violence such as bullying and intimidation that have been overlooked for far too long. Ending violence against women has always been a top priority for PSI and we have and will continue to play an active role in denouncing gender-based violence at work. This sustained effort led to our campaign to support an ILO Convention and Recommendation on “Ending violence and harassment in the world of work” at the ILC. More than fifty governments have already indicated support for an ILO Convention and Recommendation! But our work is far from over. We need to keep lobbying to ensure more government support, as well as to keep the support we have so far”.

During the 2018, PSI played an active role preparing the “ILO convention against violence and harassment in the world of work”. Unfortunately, during the standard setting committee meeting, the mention of a specific list of vulnerable groups, including young workers, was deleted. PSI has decided to advocate for the return of this specific list of vulnerable groups and calls on all PSI affiliates to lobby their governments to support the reintroduction of this list including not only young workers, but also migrant workers, LGBTQI and afro descendant and indigenous people.

As young workers, we often undergo heavy pressure due to the numerous threats that jeopardize our future. We must always remember that violence is not part of the job. PSI Young Workers have decided to celebrate International Youth Day by asking for workplaces to become safe spaces for all workers.

Join us on Twitter, Facebook and/or Instagram and send a photo or a statement with the UN hashtag #Youthday or #SafeSpaces4Youth and call to #StopGBVatWork. Spread the word that the ILO is preparing the creation of a convention against violence and harassment in the world of work and that the voice of the workers on the matter must be heard loud and clear.

Organise an event or activity

One visible and interactive way to commemorate International Youth Day is by organising an event or activity in your workplace or community. Whether it’s five or 500 people, you can help celebrate the Day. Work with your union to brainstorm about the type of event you want: seminars, lectures, debates or round table discussions to promote intergenerational understanding and partnerships on the issue of how to tackle precarious work and advocate for a more stable, sustainable future for us.

Another great way of commemorating International Youth Day and of helping bring about positive change is to be an advocate on the issue: speak out and take action to influence positive change. Some questions you could ask: How can we protect public sector workers from all forms of violence? Can we guarantee social justice without public services? How is this relevant to our community? What can we do to reduce harassment, discrimination and job insecurity at work?

Many people underestimate the real impact of social and economic violence over people in our societies. Events and campaigns can be great ways of increasing knowledge and awareness of the issue, but sometimes, just having a discussion or informal chat with your union members, friends, peers and family can be a simple yet powerful way to change their view and mobilise them on this issue.

Please email PSIWebUpdates@world-psi.org if your union is planning any special events to mark the International Youth Day on 12 August this year, so we can promote your news and photos.