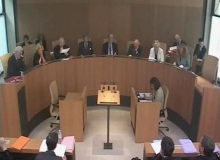 French multinationals must comply. No water provider may cut-off or disconnect service from a primary residence, even if the bills have not been paid. The decision is final, without appeal.

On Friday, 29 May, France’s Constitutional Council rejected the demands of SAUR (the third largest French water multinational corporation), which alleged that a Law passed 15 April 2013 (loi Brottes n°2013-312) violated its ‘freedom to engage in contracts and its freedom to do business’ (atteinte à la liberté contractuelle et à la liberté d'entreprendre). The Law stipulates that no water provider may cut-off or disconnect service from a primary residence, even if the bills have not been paid. The decision is final, without appeal.

The case was brought by a client of SAUR who had an arrears of €218, for which SAUR cut off the water for 20 months. SAUR’s lawyer argued that cut-offs are necessary in order that SAUR can ensure lower tariffs and higher quality service. SAUR also argued that, since the right to water does not exist in France, the relations between water provider and user fall under private law and that the contractual relationship is binding. Further, a ban on water cut-offs would substantially alter the balance of power between the user and provider, in favour of the user would in fact incite users not to pay.

The plaintiff’s lawyer, also supported by France Libertés and Coordination Eau Île-de-France, argued that contract law does not apply, given that the user never has the ability to choose between different water service providers, nor can the user negotiate the terms or the price of the contract. The lawyer also said that : “SAUR prefers to use its privilege of a dominant position as monopoly provider of a service essential to life to cover its debts and to attack the most vulnerable of our society. It exposes its choices cynically in the hopes that you will decide in its favour.”

The three main water multinationals, Suez, Veolia and SAUR have all been taken to court since the law was promulgated, to force them to stop water cut-offs as a way to get people to pay their water.

“This is a fundamental decision which clarifies the public service responsibilities of private water providers. SAUR’s lawyer was very clear in repeating three times that there is no right to water in France. As we knew all along, corporate interest is pure profit maximization. PSI will share this decision with its affiliates and civil society allies around the world, to give them proof that we can and must hold giant corporations responsible, especially when they try to engage in providing essential public services.”