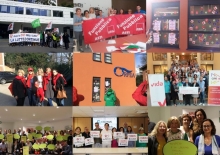 Carmen Laue and Heike Schmidt were reinstated as employees of the social care company Celenus, by a ruling of the Labour Court in Nordhausen in central Germany, on 17 October, 2018. The two union activists are members of Ver.di, a leading affiliate of PSI and the European Public Service Unions (EPSU).

They had been sacked earlier in April by the management of Celenus for distributing leaflets as part of a long-running, and continuing campaign for better pay. Celenus, which is a subsidiary of the Orpea social care multinational company, has been making increasing profits without much improvement in the terms and conditions of its employees.

The victory of Carmen and Heike was not just judicial. It is a testament to the power of workers’ solidarity. Workers across countries in Europe where Orpea operates organised series of actions in support of the campaign for the reinstatement of the two Ver.di activists. These included France, Austria, Belgium, Italy and Spain.

An injury to one, as the old trade union saying goes, is an injury to all. This victory will inspire continued solidarity in our struggle in defence of labour and trade union rights. Such solidarity will become increasingly necessary in the coming period.

The expansion of global health companies has been matched with disdain by these multinational corporations for workers’ welfare. Meanwhile, now more than ever, there is a pressing need for promoting decent work and social dialogue in the health and social sector, for the Sustainable Development Goal Target 3.8 to be achieved and health for all enthroned.

PSI, EPSU and our affiliates will continue to fight for the rights and promote the interests of our members. The workers united cannot be defeated.