Combatting the neoliberal dismantling of the state: CLATE event on outsourcing at ILC2018 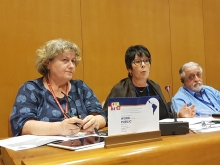 At the International Labour Conference, the Latin American State Workers’ Confederation (CLATE) held an event about the Future of Work in the Public Sector.

The event tackled issues such as outsourcing, privatisation, digitisation and the struggle for trade union rights for public service workers

Speaking on the Panel, PSI’s General Secretary, Rosa Pavanelli discussed the need to reframe the debate on digitalisation:

The first thing that needs to be made clear is that virtually all inventions are somehow funded publicly – whether it’s through tax-payer funded army research or public universities – digital goods should be seen as public goods.

Now, there is obviously going to be an impact of digitisation on the public sector – however the labour market in the past has been able to reinvent itself after new technologies shake things up. The real issue is the concentration of digital corporate power which is putting our democratic institution at threat. Just look at the Facebook and Cambridge Analaytica scandal. If this is the future then there is only one question: how can the state regulate big data – this question has to be at the heart of the debate. And it's not about just protecting out jobs. It's to protect the privacy of everyone and our democracies.

She also highlighted the need for the ILO to avoid being swept up in the PPP hype:

If the Social Protection program of the ILO is going to encourage PPPs, this is a failure of the program. Without strong public investment we will never achieve the SDGs or achieve growth and social stability.

It is shocking that some of the core functions of government are sometimes outsourced or privatised – key state responsibilities such as prisons and even armies. Luckily many countries are rethinking their policies on privatisation, reversing PPPs and remunicipalizing.

Altagracia Jimenz, Secretary General of CONATE from the Dominican Republic expanded on the dangers of outsourcing:

Outsourcing undermines the rights of all workers. As a result of this we are now seeing a decline in quality in the public sector and lower quality services, particularly in the health department. Key jobs are now being outsourced, such as diagnosis or radiology – if done wrong, people's' lives are on the line.

A key problem is that outsourcing reduces the possibility for union organising in the public sector as they are not part of official state employment – they are working in parallel. Sometimes they don't even know who their employer is as they are sub sub sub contracted! How can you organise when you don't know who your employer is!? What kind of quality can be guaranteed in a situation like this? This is why it is so important to raise this issue within the ILO – we need to demand that the ILO enhances its defence of the public service, otherwise we will never manage to correct this.

Outsourced workers only earn 60% of a normal state employee – this trend is spreading. The ease with which public procurement can hire and fire creates opportunities for nepotism and a turnstile government.