Cameroon Water Back in Public Hands 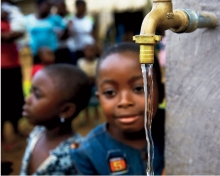 On May Day 2018, Cameroon celebrates not only the gains made by workers and trade unions over the years, but can also celebrate the end of a ten-year experiment with privatisation of water services management. May 1st 2018 is the day that the government of Cameroon regains control of its water utility.

The PSIRU brief traces the genesis and terminus of this privatisation, which of course involves the IMF and the World Bank as instigators and facilitators.  Strangely enough, neither of the French companies got the concession, even though at least one of them tried. Stranger still, the PPP was accorded to a public utility from Morocco – which experimented with a for-profit model.

Needless to say, the for-profit model did not suit, the results were not as expected, so there was no contract renewal – which did not stop the Moroccan utility, in fine for-profit behaviour, from claiming damages.

Rebuilding the public utility starts today. PSI suggests that Cameroon look for public-public partnerships, perhaps under the UN Habitat Global Water Operators Partnership Alliance, which does not allow profit-making. Many public utilities are prepared to help on the basis of solidarity.

PSI also advises that management involve the workers and their union in the rebuilding. There are a number of grievances outstanding from the privatisation, and they need to be resolved. More important is the workers’ knowledge and expertise, which must be applied to the process of rebuilding.

Management can also learn from the hundreds of examples of return to public hands, including the importance of giving the community a role in oversight of the utility. Public participation in decision-making can help to avoid mistakes caused by lack of transparency and accountability.

Finally, PSI recommends keeping a close eye on the contracts given to UK’s Biwater and France’s Suez and Veolia.