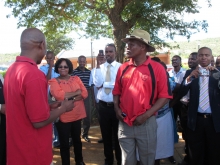 Last week the High Court of Botswana ruled that the mass dismissals of public sector workers in 2011 were illegal, and reinstated all the workers. Now the return of the fired workers has been suspended.

Nearly 100,000 public service workers, around 80% of the Botswana’s public sector workers, including teachers, nurses and doctors, took industrial action last year when the government refused to bargain wages after workers had been subjected to a wage freeze for more than three years.  The government responded by firing around 3,000 workers to intimidate those who had gone on strike.

A week ago the High Court of Botswana ruled that many of the dismissals were illegal, and that the workers must be reinstated.

Now Botswana's Court of Appeal has suspended the High Court order following an application by the government. Judge Ian Kirby put on hold the ruling and said that an appeal, sought by the state, would be heard in August.

“It is unacceptable,” says Peter Waldorf, General Secretary of PSI, “that the government is rejecting the principles of natural justice and has chosen a path which again denies trade union rights.

"PSI will continue to campaign for justice in Botswana. PSI affirms its support for our affiliates and our commitment to bring international pressure to reverse the deteriorating trade union rights situation for public services workers in Botswana.”