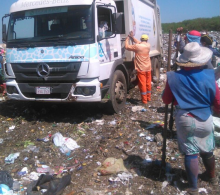 Since the campaign to bring the municipal waste collection service back into the public sector in 2003, the Asuncion Municipal Workers’ Union (Sindicato de Obreros y Empleados de la Municipalidad de Asuncion, SINOEMA) affiliated to the PSI, has worked hard to maintain a quality service. The union encourages working class solidarity with recyclers and other informal workers because it understands that they and the community have an important role in keeping waste management under municipal control.

Asuncion, Paraguay’s capital city, has a population of 600,000, which generates more than 700 tonnes of waste every day. If we include the rest of the metropolitan area, the population rises to 2.5 million and accounts for 70% of national GDP. In general, the quality of services and access to them is better in Asuncion and the metropolitan area than in the rest of the country, and waste management is no different.

Integrated management: still on the agenda

Municipal waste services cover 92% of the population. National and municipal legislation on the integrated management of solid waste [2] has yet to be put into practice. The government enacted a national law eight years ago but has not issued the regulations necessary to implement it. Meanwhile, city by-laws have to deal with the challenge of dozens of illegal landfill sites. As a result, with the exception of some neighbourhoods where a pilot project for the selective collection of waste is under way, waste is not sorted or treated before being transported to the landfill site at La Cateura. A private company, EMPO S.A., has run the site since 2005.

La Cateura began operations in 1985. Although it was scheduled to operate until 2020, a series of disputes and technical problems led the local authority to order its closure by 2018. The company is currently building a new landfill facility on premises in the neighbouring municipality of Villa Hayes. However, serious doubts remain about whether operations will be able to start there on time because of a legal dispute between EMPO, Villa Hayes and the waste collection concessionaire currently operating in Villa Hayes.

There is also a dispute with the more than 700 waste pickers (gancheros) who sort waste for reuse at the landfill site and who are afraid of losing their job when the transfer goes ahead. The company is proposing to keep a waste transfer facility at La Cateura, but the waste pickers are asking the municipality to build a recycling plant at the site and implement an Integrated Management Plan, as envisaged by the 2014 Municipal Order. They hope in this way to keep their jobs and income and improve working conditions.

Asuncion residents pay the municipality directly for the service. EMPO bill the municipality for each tonne of waste taken to the landfill site. The cost of this service forms a large proportion of the municipal budget and is almost as much as the local authority’s total wage bill.

The trade union fight to improve working conditions in the sector

In Asuncion, municipal street cleaning and waste collection services employ 2,000 workers, equivalent to 20% of the municipal workforce. Most of these workers (60%) are on permanent contracts but are only paid for every day they work. The number of workers employed on this basis is increasing in the street cleaning sector. 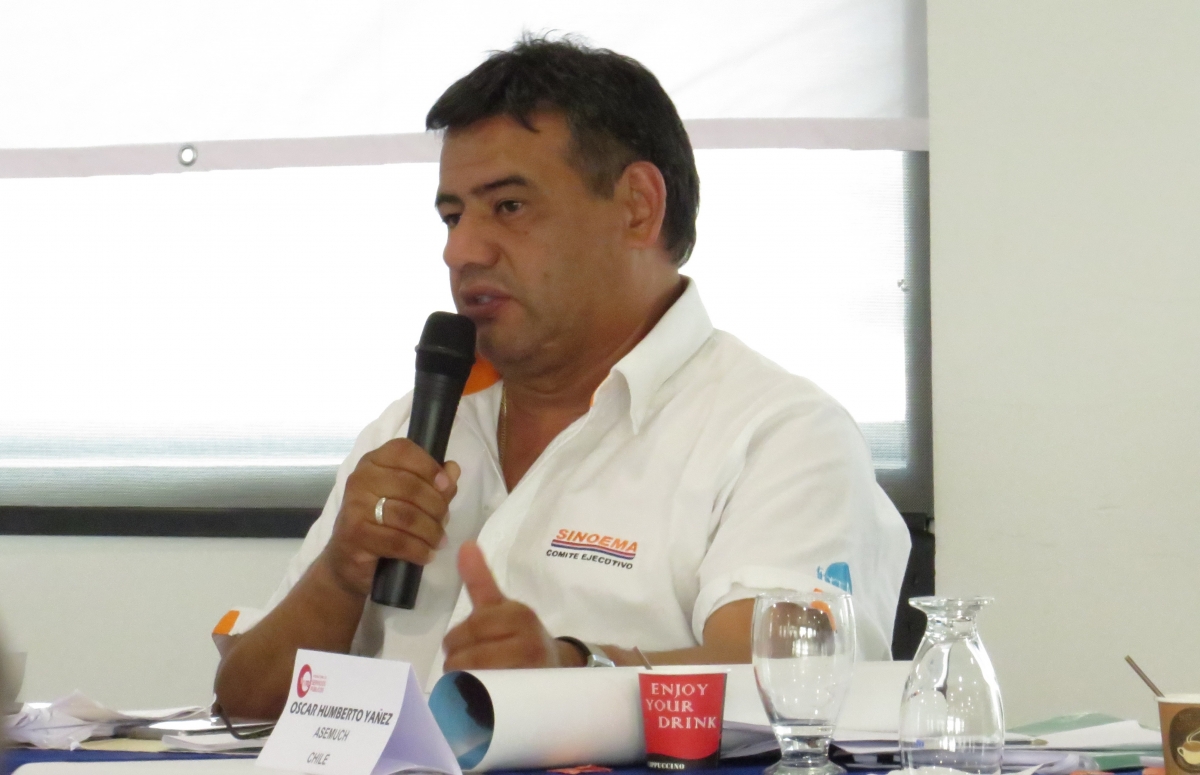 The trade unions have made significant progress in recent years. They have concluded collective agreements that make provision for bonuses to street cleaning workers in recognition of the unhygienic nature of the work; bonuses for night shifts, Sundays and holiday working; social benefits such as school benefit; recognition of seniority for day labourers; bonuses recognising university qualifications, health insurance, etc. In response to the PSI’s Quality Public Services campaign, 700 workers on precarious contracts (civil contracts with no extraordinary payments or bonuses) were given permanent  contracts in 2017.  Around 3% of Asuncion’s municipal workers were on precarious contracts in 2016.

The importance of solidarity between workers

The working conditions of Asuncion’s municipal workers are generally better than those of workers in the rest of the country, although some improvements are expected there. Research published by the PSI in 2016 said: “… there are big differences between the capital city of Asuncion and municipalities in the interior of the country, in terms of pay and access to social security” [3]. For example, waste collectors in Asuncion are paid US$500-800, which is about double the pay in other municipalities in the metropolitan area. Similarly, trade union membership is relatively high among Asuncion municipal workers compared to the workforce in other towns.

SINOEMA is the most representative union in the street cleaning sector. The union wants to build a national union that will allow it to extend its campaigns to include all workers in the sector. Negotiation of a framework collective agreement would avoid each union having to negotiate independently with each municipality, which leaves them exposed to the goodwill or otherwise of each local authority. 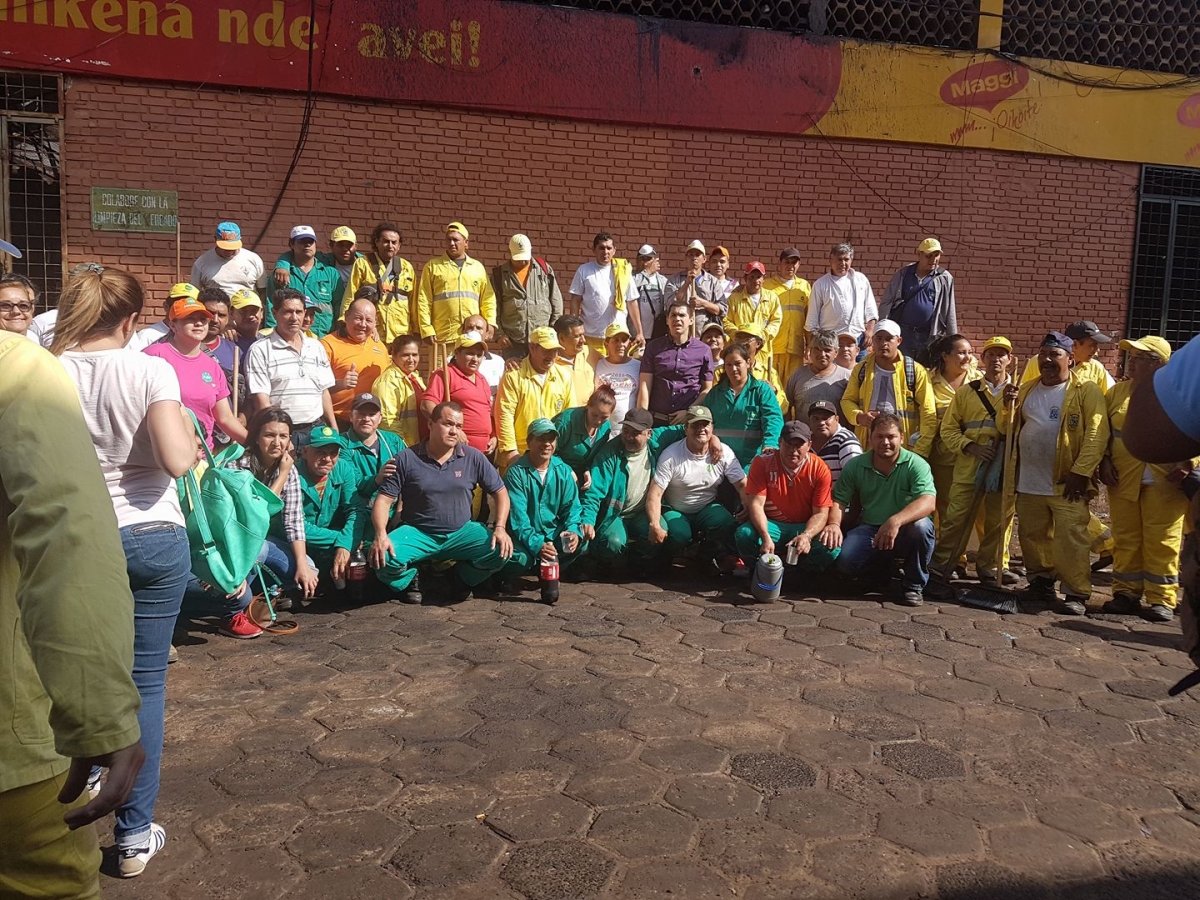 The informal workforce comprises more than 2,000 street waste pickers (carriteros) and around 800 landfill waste pickers (gancheros). The waste pickers themselves, supported by SINOEMA, successfully negotiated their right to continue working on the site when the service was contracted to EMPO.

Although SINOEMA does not recruit informal workers, it gives them regular support. For example, its members do not recycle materials from the waste they collect, so as not to affect the incomes of the gancheros. This commitment was the result of sustained trade union efforts to build solidarity among the workers.

The defence of a quality public sector waste collection service

The fact that the service remains in the public sector is a tribute to the municipal workers who fought for remunicipalisation in 2003 after an indefinite strike during which one worker was sadly killed as a result of police repression. Public support was crucial for this achievement. Workers carried out awareness raising and public education campaigns focusing on service quality and cost.

Municipal waste collection workers also made an enormous personal effort, doing the job with a reduced fleet of vehicles in the knowledge that the only way of getting the work back into the public sector was to demonstrate their capacity to provide a quality service.

Recently, the union has been in dispute with the local authority about the lack of maintenance on the fleet of lorries, which the union felt indicated a secret agenda to privatise the service. However, the unions have negotiated agreements that, in principle, provide for improvements, including the purchase of compacting lorries and other vehicles.

This article is available in English - French - Spanish - Russian