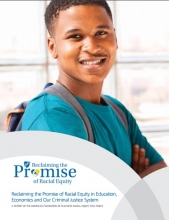 Leaders and members of the AFT have spent the past year having blunt, tough, uncomfortable, courageous conversations about how to address the lingering effects of racism and inequity in our nation—especially related to black males. As a result of those conversations, the AFT on Oct. 9 became the first public sector union in modern history to issue a substantive, action-oriented report on achieving racial equity in America.

The report, “Reclaiming the Promise of Racial Equity: In Education, Economics and Our Criminal Justice System,” provides a framework for the development of policy in national and state legislation, at the school board level and inside the AFT itself. As the AFT approaches its 100th year, this report serves as a capstone to a legacy of fighting for democracy and championing fairness and economic opportunity for all.

“I have been humbled and heartened by the overwhelming response from leaders and members around the country who participated in these courageous conversations,” said AFT Secretary-Treasurer Lorretta Johnson, who chairs the AFT’s Racial Equity Task Force. “I am proud that the AFT is the first union in the labor movement to address the crisis facing black males in a significant way. And for this work to continue, it will take the effort of all our members, including our white brothers and sisters, and the entire labor movement coming together.”

Members of the task force shared their experience hammering out the report with the AFT executive council just before the council unanimously approved it—with a standing ovation. They described the raw emotion they felt as disheartening statistics about discrimination became deeply personal, and member after member described instances of indignity and discrimination—being followed in a store simply because they were black, or watching as worried white women crossed the street to avoid them.

Many white task force members had never imagined the reality of discrimination in quite so much detail, or heard about it in such a relatable, personal way. And many were uncomfortable confronting the truth.

“It is not easy, I’m sure, for a white person to sit among black folks and hear about the indignities to which we have been subjected,” said Keith Johnson, an executive board member of the Detroit Federation of Teachers, an AFT vice president and a member of the task force. “It is not easy to hear that people that look like you were the ones responsible for perpetrating some of those injustices.”

Jeff Grider, executive vice president of the Portland (Ore.) Community College Federation of Classified Employees, a campus security officer and a white man, embraced that struggle. Just as the sexual assault prevention movement focuses not just on women taking action to stay safe but on men taking action to stop assaulting them in the first place, the racial equity movement must both help victims and stop perpetrators, he said. “My challenge as a white person is to teach other white people how not to be racist,” said Grider.

Shelvy Abrams, also an AFT vice president, an executive committee member of the United Federation of Teachers and a task force member, described seeing members of the Ku Klux Klan parade through her town when she was four or five years old, targeting her family and others. Her mother told her “never to hate,” so she suppressed her anger for years, pushing aside the everyday slights she would experience as a black woman. The AFT changed that. “When we had that task force, I was able to say, ‘OK, let it go,’ ” she said. “Now is the time to speak up for my rights.”
AFT President Randi Weingarten said, “We must do everything in our power to make sure that black lives matter in every classroom, on every street and in every court in America. This report is a step in transforming our country for the better and in using this moment to start transforming ourselves.”

The report highlights a number of recommendations that the AFT plans to implement in partnership with its state and local affiliates, including to: