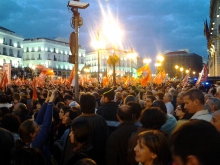 Public Services International stands in solidarity with the hundreds of thousands of workers and PSI members who will be participating in the ETUC’s European day of action on 14 November.

Public Services International stands in solidarity with the hundreds of thousands of workers and PSI members who will be participating in the ETUC’s European day of action on 14 November.

As a result of financial crisis and austerity measures by government, cuts in the public sector are widespread. Economic crisis is used as a cover to push through far reaching deregulation of labour markets, creating voucher based systems for the provision of services and other short-sighted policies.

The latest figures from the European Commission show the European economy shrinking in 2012, which confirms that the policy of co-ordinated budget cuts undermines rather than supports a potential recovery. The austerity measures are dragging Europe into economic stagnation and a continuous dismantling of the European social model. The continuation of these policies will cause only more misery across Europe with wages falling further and unemployment rising.

PSI fully supports the call for a Social Compact for Europe by the ETUC, to be discussed and agreed upon at EU tripartite level. The Social Compact will put fundamental social rights firmly ahead of economic freedoms. That is the spirit of the Charter of Fundamental Rights integrated in the Treaty of Lisbon.

Public service unions will be playing their part in the demonstrations and other activities and joining the general strikes in Spain and Portugal that are calling for an end to austerity.

PSI general secretary Peter Waldorff says: “Quality public services are the foundation of democratic societies and successful economies. They ensure that everyone has equal access to vital services, including as health care, education, electricity, clean water and sanitation. Cutting budgets and privatizing services leads to maximizing corporate profits which replaces the public interest as the driving force. Such reforms can only lead to more inequality. PSI fully supports this European day of action and the urgent call for a social compact. ”

He adds: “We need social and economic governance that takes account of social justice and the need for jobs and real growth. This needs to be achieved through collective bargaining and social dialogue at EU policy level. Trade unions cannot stand by while the social guarantees are being hacked out of the European core values.   We support the actions on 14 November!”

Actions are taking place in many countries around Europe. For example, in France CGT, CFDT and UNSA organise 25 demonstrations for jobs and solidarity in Europe. LO-Sweden is organising a media action on the topic of austerity. LO will address solidarity with Spanish trade unions through a letter to Spanish Prime Minister. It will be followed by a press conference of LO, TCO and Saco, and with the participation of Andreas Stoimanidis from GSEE (Greece). In Germany, the DGB is organising gatherings and assemblies in several cities in Germany. One of the major actions will take place in front of the Brandenburg Gate in Berlin.

In the United States, PSI affiliate National Nurses United is leading actions in support of the Robin Hood Tax and against austerity and social benefit cuts in San Francisco, Los Angeles, Boston and New York on Wednesday.  NNU is doing this purposely to coincide with PSI/EPSU actions in Europe and link struggles.