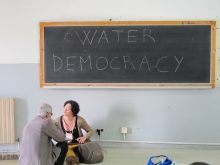 The network of water justice advocates gathered in Tunis to further international collaboration and to support local activists. A six-hour meeting was organised prior to the launch of the world social forum on 25 March, and there were a number of meetings within the official WSF agenda.

The water justice movement continues to try to integrate new issues and tendencies, such as:

Activists shared examples of challenges, campaigns and victories.  The movement in India to resist mega-dams and river linking has used many tactics of non-violent resistance.  The current incursion of the privateers in India has prompted new resistance models, including legal challenges, convening tribunals headed by eminent (retired) persons, etc.

A number of recommendations from these meetings:

The work on privatisation is well anchored, but needs constant vigilance in reaching out to new partners, as the dynamics are changing.  National austerity programmes in many countries provide the perfect pretext for the privateers, especially as municipal budgets are under increasing pressure.  In addition to Suez and Veolia, we are seeing a number of new corporate actors, mainly national and local construction companies, for example in Brazil.  Private equity owners are not expanding greatly, but they still need watching.  The Chinese company Beijing Enterprises Water Group  recently bought Veolia’s Portuguese subsidiary, the first incursion of the Chinese into the global water market.  Within PSI, we need to heighten our ability to provide early warning of privatisation policies.

Ridha Fourti from the Tunisian affiliate UGTT representing workers in the public utility SONEDE explained the challenges they face, including attempts by the French to privatise (successfully blocked), and recent proposals to build a desalination plant under public ownership and management - as opposed to giving it over to the privateers from the start.  Tunisia suffers from water stress, and even with the most modern management, will soon be unable to provide for all the needs in water.

Fourti also outlined political dynamics in the two years since the revolution, and the challenges that these pose for trade unions and civil society activists.  The current government is clearly espousing neoliberal policies.  Civil society organisations have suffered under the previous administration, which severely restricted political activity.  Trade unions were similarly compromised, although they were able to maintain their existence based on the presence in the workplace.  The political party Ennahda is now trying to place its people in all administrative positions that it can occupy, which means that the directors of the public utilities are political appointees.  It is even trying to place its people to stand for union elections, forcing the UGTT into defensive postures.

One meeting focused on the collaboration between trade unions and civil society activists.  Various experiences, good and bad, were outlined, demonstrating the important differences of national political history and culture.  All agreed that the alliance between trade unions and civil society has delivered many important results and is one of the keys to work in the future.