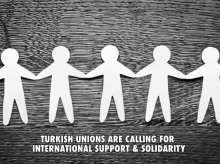 Trade union rights and civil liberties have significantly deteriorated in Turkey since the attempted coup of 15 and 16 July 2016. Under the state of emergency, the Turkish government has arrested and detained thousands of workers and trade unionists. By 8 February 2017, more than 100.000 public employees have been summarily suspended or dismissed, accused in most cases without any basis of proof or evidence of having been involved in the attempted military coup. This situation continues until today.

PSI has condemned the government’s arbitrary and repressive actions and demanded the immediate release and reinstatement of all workers and public employees wrongly accused. PSI has been following the events and working with affiliates and other workers' organizations to guarantee the effective protection of workers and trade unionists’ lives.

Following calls from Turkish trade unions, it has been agreed to launch a solidarity fund in support of all organisations that are most affected by the measures taken by the Turkish authorities. This financial support will primarily be used to provide legal assistance and support their actions at national, European and international level.

PSI therefore appeals for solidarity and calls on all affiliates to contribute to this fund to help Turkish trade unions and workers who are operating under very difficult social, economic, and political conditions, making it impossible for them to bear those costs themselves.

You can easily make your donation through PayPal:

We count on you to support our Turkish friends and colleagues.