Thousands of union workers gathered all over the United States to chant, cheer and wave signs in a show of unity ahead of a Supreme Court hearing that could have a profound effect on organised labour.
Representatives of unions representing teachers, social workers and various other fields, including government agencies, turned out to show solidarity.

President of American Federation of Teachers (AFT), Randi Weingarten, joined the working people in San Diego standing up for freedom and demanding an end to the system that’s rigged against the unions:

Unions build a better life for people, and unfortunately some of the corporate interests in this country are threatened by that. Anything that gives regular folks an opportunity, the Koch’s, the DeVos’ and billionaires are against.

She got support from Paula Voos, a labour professor at Rutgers University, who spoke to CBS News about the Supreme Court Case:

On Monday 26th of February, the Supreme Court will consider Janus vs. AFSCME — a controversial legal challenge to a longstanding precedent that protects the ability of public employee unions to represent their members and nonmembers, to speak out on matters of public interest, such as collective bargain. 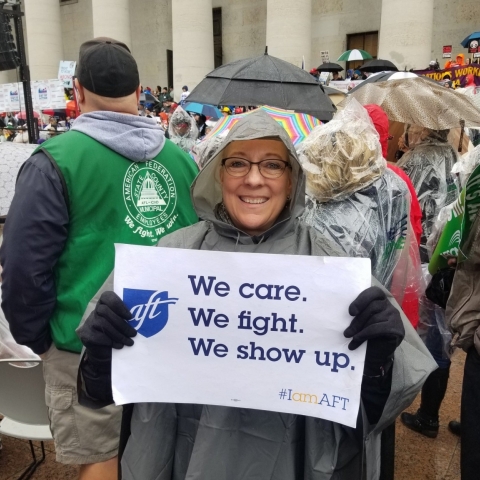 The Janus vs AFSCME Supreme Court case represents the biggest anti-union legal move in half a century. The case is supported by big monied conservatives including the Koch Brothers with the goal of diminishing the power of the labour movement under the disguise of freedom of speech.

If the court rules in favour of the plaintiff, fair share fees paid by non-member workers to cover their representation will no longer be obligatory – yet Unions will still be legally-bound to represent them. This case warps the idea of freedom of speech by enabling one person’s complaint to undermine the interests of millions of workers across the country who benefit from collective bargaining. The Amicus Curiae brief prepared by our U.S. affiliates for the court shows how fair share fees are central to an efficient and effective public sector.

If unions are legally required to bargain for paying and non-paying workers equally, it makes economic sense for a worker not to pay. This could create what amounts to a death spiral: When unions lose funding, they have fewer resources to negotiate good benefits for their members; that causes members to leave, which further weakens unions' bargaining power.

The result of weaker unions is often less money for workers -- whether unionised or not. After Wisconsin Gov. Scott Walker restricted public-employee unions in the state, the rate of unionization fell by 6 percentage points and teachers' salaries dropped by an average of $10,000, according to CBS News.