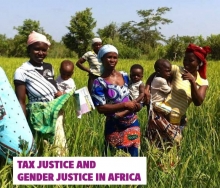 This study on tax and public services impact on women and girls in Ghana was commissioned by PSI with support from Friedrich Ebert Stiftung (FES). The study is available in English and the executive summaries are available in French and Spanish. 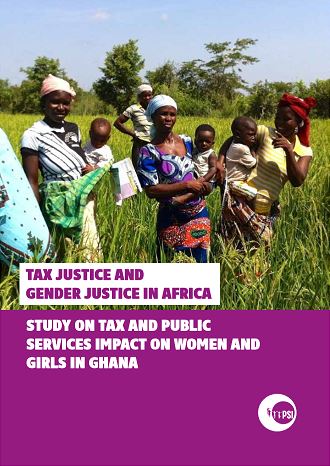 Tax revenues are critical for a country’s development, especially, to finance the provision of public goods/services. The African continent, with its vast natural resources, is still faced with high incidence of poverty and underdevelopment especially in the provision of public services. Most African countries are not able to raise enough revenues to finance developmental projects and investments- as most revenues are lost through tax evasion and avoidance. Tax evasion and avoidance is a global phenomenon, but the African continent suffers adversely. Furthermore, women share a greater burden with respect to issues of tax avoidance and evasion in developing countries since they are more likely to live in poverty as compared to men. They are generally paid less and work more hours, increasing their exposure to discrimination and violence. Government institutions tasked with detecting illicit financial flows through tax avoidance and evasion are underfunded coupled with limited legal and auditing experts.

A major hurdle in most developing nations is the limited access to public services provisions such as education, health, water and sanitation. The few public services available are overstretched mainly to high population growth. This research report explores Ghana’s case of the effects of tax evasion and avoidance on the ability of the state to facilitate development for women and girls, with a focus on how public services are starved by tax evasion and avoidance. Also, it seeks to answer the effects of investment in these public services in closing the gender gap. This research report also in a way provides insights into ways of achieving target 17.1 of the Sustainable Development Goals (SDGs) which seeks to “strengthen domestic resource mobilization, including through international support to developing countries to improve domestic capacity for tax and other revenue collection”.

The objectives of this study are achieved by analysing the current official data of public tax institutions of the last decade i.e. 2007-2017, analysing the national budget approved for the same decade and the governmental expenditures on key public services provisions (education, health, water, sanitation, care) and by comparing the figures of tax evasion and evasion with public investment of the above public services. Lastly, it analyses the impact of these investment on women and girls by focusing on two critical areas in public services provision i.e. education and health.

A careful overview of Ghana’s budget over the last decade (2007-2017) shows a budget deficit (a situation where expenditures exceeding revenues) with government resorting to borrowing from international markets i.e. through bonds and loans. This partly explains why the country in recent years has been saddled with high debts and in some cases request to the IMF for bailout. There is also the reliance on donor funds and grants to finance most developmental projects in the annual budget and economic statements. Despite this, there is an agenda by the government of the day to move the country beyond aid. Ghana has since 2014 been operating Program Based Budgeting (PBB) which essentially ties planned expenditures to a set of policy objectives. The budget of Ghana acknowledges the different roles that men, boys, women and girls do play in the economy. Hence, it takes key policy initiatives with women in focus, but this is yet to reach full potential due to inadequate gender budget experts, capacity constraints and technical support.

One of the aims of this study is to analyse overall government expenditures and expenditures dedicated to critical public services provisions such as education, care, health, water and sanitation.  This is done by referring to the budget and economic policy statements from the Ministry of Finance and Economic Planning covering 2007-2017. The focus here is on funds solely from the Government of Ghana. This is primarily done to put the issue of tax evasion/ avoidance in perspective and also provide some recommendations to “Ghana beyond Aid” agenda currently being undertaken by the current government.