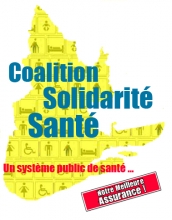 The huge increase in the costs of prescription drugs in Quebec is putting pressure on the health care system. The implementation of a 100% public regime would allow the Québec government to have real negotiating power with the pharmaceutical industry and permit it to achieve considerable savings.

The Government of Québec has been outspoken on its intention to clean up public finances, and its budgetary restraint has led to cuts in the supply of public services to the population. However, some very expensive healthcare costs are beyond its control and need special attention. The adoption of a new drug policy, based on fully public drug insurance, would save the government $ 1 billion to $ 3 billion per year.

The huge increase in the costs of prescription drugs in Quebec is putting pressure on the health care system. In 2014, these costs amounted to nearly $ 7.7 billion, or 17% of total health expenditure. Quebec ranked second in the world for prescription drug expenditures per capita, just behind the United States. In addition, the price of drugs is 30% higher in Quebec and Canada than in most developed countries. Together with Switzerland, they are the most expensive in the world.

Public-private system has not delivered

Quebec's public-private drug plan, introduced in 1997, has only partially fulfilled its promises. Although it has provided insurance to many people who had no protection, it has not been able to guarantee reasonable and equitable access to medicines for all. This was revealed in March 2015 in the Commissioner of Health and Welfare's latest study. At present, almost 12% of people in Quebec cannot obtain prescription drugs due to lack of financial means.

Resuming control of the situation

Neither the Québec government nor the private group insurance plans, which cover nearly 60% of the population, have been able to establish a balance of power with the pharmaceutical companies. The provinces of Canada are unique among developed countries in that they have not integrated prescription drugs into their public health care system.

In countries with such coverage (France, the United Kingdom, Sweden, Australia and New Zealand), drugs cost between 16% and 40% less than in Quebec, and their annual indexation is two to three times lower.

In short, the implementation of a 100% public regime would allow the Québec government to have real negotiating power with the pharmaceutical industry and permit it to achieve considerable savings through consolidated purchases.

More than 420 community and trade union organisations, as well as many health specialists, supported the campaign for the establishment of a completely public drugs insurance launched by the Consumers’ Association in 2009. However, the Government of Quebec ignored the unions’ proposals and demands.

The Coalition Solidarité Santé (Solidarity Health Coalition) has taken on this issue. This Québec group of citizens’ committees and trade unions, community and religious organisations works on many fronts to defend the right to health of all Quebecois, regardless of the status or income of citizens. The basic principles that constitute the cornerstones of Québec's health and social services network since its inception, namely its public character, its accessibility, universality and comprehensiveness, are at the root of the actions of this coalition.

For members of the coalition, the time has come to increase pressure and to call on the population, which is directly affected, both by the exorbitant costs of the drugs and by the austerity measures affecting public services, to take action.

Campaign There is a remedy for cuts!

This information and citizen mobilization campaign aims to deconstruct the government's debate on public finances and to persuade the government to introduce a fully public drug insurance.

The site http://remedeauxcoupures.cssante.com/ presents information on the main issues and allows people to sign the letter of support, which is automatically sent (electronically) to the deputy of their county, sending copies to the ministers and organisations concerned. Through this campaign of citizens’ letters, local elected representatives are invited to call on the government of Quebec to adopt a new drugs policy based on a fully public prescription drug insurance plan.

More than 6,500 citizens wrote to their MNAs (Members of the National Assembly), and more than 8,200 people signed the Change.org petition that was launched as part of the campaign. More than 85% of the participants said they wished to be informed about the results and the follow-up of the campaign.

MNAs from all political parties reacted and responded to their fellow citizens. The Coalition Solidarité Santé was invited to participate in the special parliamentary committee on Bill 81 aimed at reducing the cost of certain drugs covered by the general prescription drug insurance plan.

The Coalition met with members of the Health Committee of the Quebecois Party responsible for fueling the party's electoral platform for the upcoming elections. The issues of the citizens' campaign were widely discussed. The Coalition is also closely following the work of the Québec Solidaire party, which has so far tabled two bills on the subject, but these have not been called for legislative consideration.

The citizens' campaign is continuing. A second phase will be launched shortly. Recent developments in the rest of Canada indicate a real interest in the development of a public plan. In May 2016, a meeting of the Liberal Party of Canada in Winnipeg passed a resolution "officially supporting a national and universal drug plan as a political priority". The House of Commons Standing Committee on Health has been working since April 2016 to develop a national Pharmacare program.

These all go to show that when we dare to fight, we dare to win. Unions in Quebec will continue with the campaign for 100% public medication insurance, as an integral element of our pursuit of universal public health care.

This article is an extract from the “Right to Health” newsletter issue 02/2017. Subscribe to the newsletter. Send us your stories.