Quito: greater recognition of the role of municipal waste workers but their rights remain vulnerable

The Metropolitan District of Quito (DMQ) is home to around 2.6 million people generating some 2,000 tonnes of waste every day. An Integrated Solid Waste Management (ISWM) system has been in place since 2010, and is currently run by public companies. Among other things, it includes informal waste workers as “environmental managers”.

Although there is an appreciation of the role of both informal waste workers (“waste pickers”) and public municipal waste workers, there are also a number of challenges arising, such as the possible loss of jobs due to automation, and the weakening of collective bargaining.

The sector’s unions are denouncing the deterioration in equipment that has occurred over recent years, a possible misappropriation of funds, and attempts to dismantle the publicly-owned sanitation companies. In addition to demanding improvements in employment conditions, the unions’ programmes of action also include defending the quality of public services and guaranteeing their funding, both key elements for ensuring that municipal waste services remain in public hands.

The Integrated Solid Waste Management (ISWM) systemin Ecuador is set within the 2008 reform of the National Constitution. The Metropolitan District of Quito (DMQ) has had its own regulatory law texts referring to ISWM since 2010.

More than 95% of the population benefit from cleaning and waste collection services, which are the responsibility of the local public sanitation company, EMASEO. This company carries out general tasks of public cleaning, selective waste collection in the different areas of the city, and the transfer of waste to Environmental Management Centres (sorting, storage and sale) and Transfer Stations. The public integrated waste management company (EMGIRS), for its part, is responsible for removing non-recoverable waste from Transfer Stations for its final disposal and for running the “El Inga” landfill site. These two public companies are currently in the process of merging.

It is estimated that between 10% and 20% of the waste generated in DMQ is recovered. Various actors consider this is of important economic value and, in particular, that it has significantly improved the incomes of informal waste workers.

Recognising workers as key actors in the municipal waste service

One of the most notable aspects of the DMQ’s ISWM policy is its recognition and greater appreciation of the sector’s workers, both formal and informal. The regulations refer specifically to these actors as essential to the good running of the system and recognise the former informal “waste pickers” as “environmental managers”. Although they are not formally employed by the municipality, they are now entitled to certain employment rights, along with social security coverage.

Some 1,700 municipal workers (1,339 in EMASEO and 287 in EMGIRS) and 600 ‘environmental managers’ provide this service, whether in selective waste collection, in the Environmental Management Centres or in the Transfer Stations. 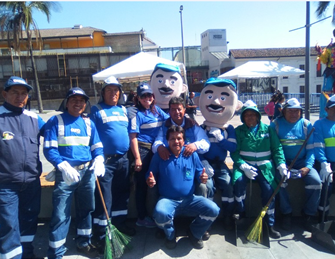 It must still be recalled, however, that there remain more than a thousand “waste pickers” on the streets of Quito with no municipal recognition at all. These workers provide an important service to the city but suffer from a serious lack of protection.

Employment rights in the waste sector: recognition and vulnerability

While the work of the sector’s employees is recognised and valued, and health and safety conditions are largely met thanks, above all, to the constant oversight of the unions, the work force is at the same time worryingly vulnerable, particularly since public sector collective bargaining came to an end in Ecuador. This was denounced by Ecuadorian and international organisations alike, including PSI, and even elicited observations from the ILO’s regulatory control bodies.

The weight of waste sector workers within the municipal workforce (28%) is significant, along with their high level of unionisation, currently standing at more than 70%. It is no less important to note that the union also covers some 60% of the DMQ’s ‘environmental managers’, in addition to providing ongoing support for and coordination with this group. This gives the union significant representation and legitimacy vis-à-vis the local authorities. 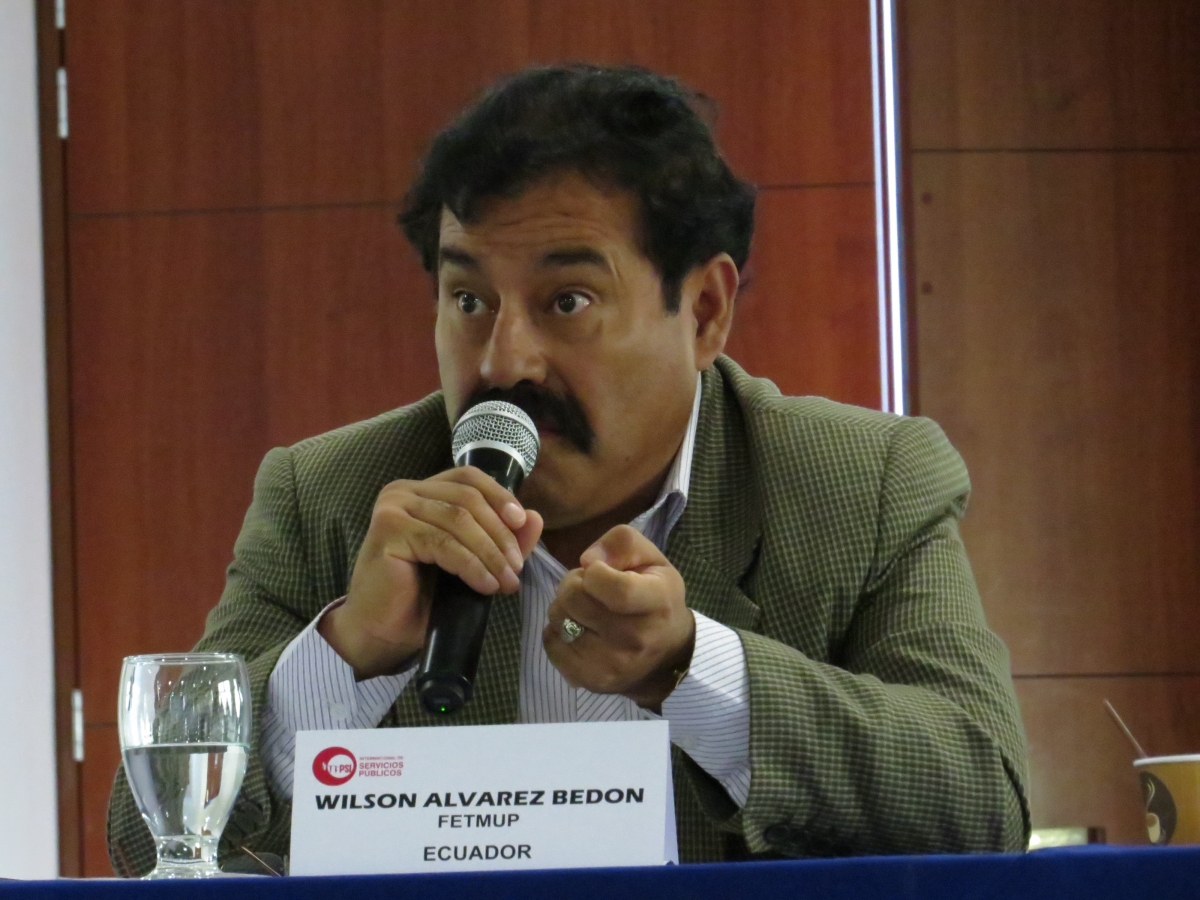 The union struggle: inclusion of informal workers, defence of jobs and sustainability of service

The sectoral challenges facing PSI affiliate the Federation of Provincial and Municipal Workers (FETMyP) in this context are not inconsequential and encompass far more than the historic struggle to improve workers’ employment conditions.

One such challenge is to bring about the inclusion of informal workers. Apart from getting the ‘environmental managers’ to join FETMyP, the union is also providing them with ongoing support and advice aimed at improving their organisational capacity. This is not forgetting, of course, the enormous number of waste pickers working on the streets without any kind of recognition or employment protection whatsoever.

The FETMyP supported the ISWM from the very beginning and has worked to ensure its success given the opportunity it offers to improve sector workers’ employment conditions and safety, and also because of what a good waste management system means in environmental and public health terms generally. There is, however, one issue of concern, and that is the growing mechanisation of the collection service. While the municipality is focused on the improved efficiencies and reduced occupational risks that this will entail, the union is warning of possible job losses without any strategy in place to provide a just transition towards other more qualified jobs in the sector.

As the unions have clearly noted, there may be a contradiction in this apparent concern for service efficiency if it leads to a deterioration in quality due to a lack of resources and inputs: the union is denouncing the deteriorating machinery and tools and obsolescent vehicle fleet, something that is also recognised by EMASEO itself.

Interview with Wilson Álvarez Bedón, President of the FETMyP, on the waste collection crisis in Quito in 2017.

The union is very aware of the need to defend service quality and to ensure its funding so that it can continue to be publicly run. It has thus been a key actor in maintaining payment for the service within the electricity bill, something that had been abolished by law. According to EMASEO, this would have meant a 50% loss in the company’s capacity to raise funds. 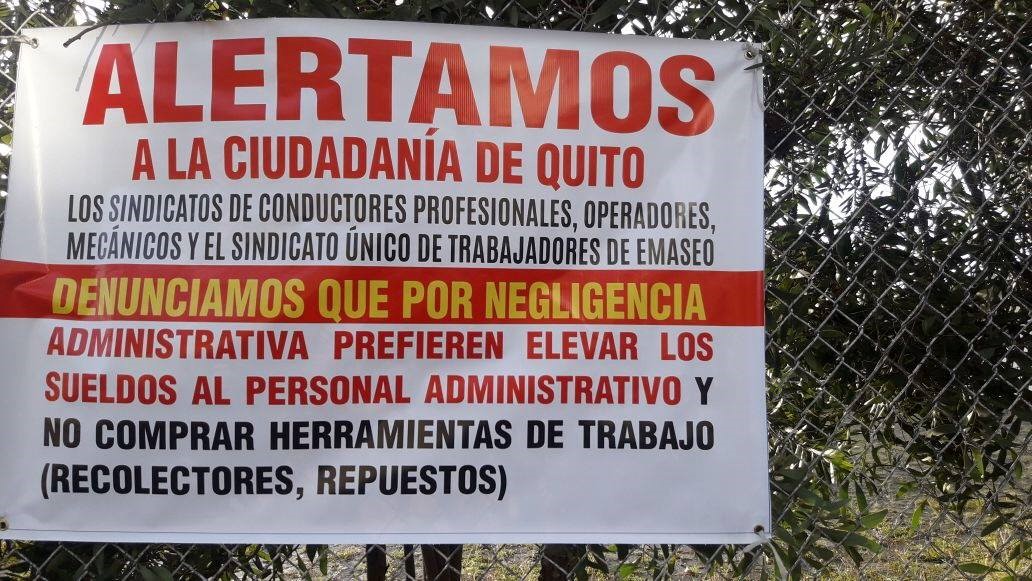 There is also a contradiction in the recognition to the role of workers and the concern over their working conditions because, for example, they have become far more vulnerable since collective bargaining in the Ecuadorean public sector was ended by the government, and since workers’ representatives have been excluded from the Directorio de las Empresas Públicas (Board of Public Companies),creating a barrier to the scrutiny over the use of funds and their possible misappropriation, the union reports.

Although many of these issues are due to changes in national regulations, the union sees these moves as an attempt to dismantle public services, and quite possibly a dangerous step towards justifying the privatisation of the municipal waste service in the future. The union is therefore working constantly to communicate with the public in order to explain and raise awareness of the situation and gain their support and commitment to defending this public service.