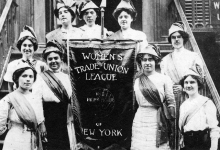 Public Services International joins its members around the world in celebrating women and their achievements on 8th of March. PSI promotes the work of women trade unionists and stands united with all of our sisters who deliver vital public services.

On the eve of the United Nations Commission on the Status of Women, that will focus in its 58th session on the post-2015 development agenda, we have to recognize that a lot of work remains to be done to achieve gender equality. Austerity and globalization have pushed millions of women out of the labour market and most of the jobs created in the last decades are short-term, part-time, temporary, casual or informal and largely precarious. A majority of these lower paid, less protected workers are women.

Wage inequality explains a big part of income inequality, because the share of wages in total income declined over the last two decades in 70 % of countries with available data, despite an increase in employment rates globally whereas the share of profits in national income increased virtually everywhere (ILO). Around the world, the gender wage gap remains a reality across the board, including in the public sector.

To address and redress income inequality, the post-2015 Development Agenda must, above all, focus on employment, well-being and social security. This means that it must also address gender inequity in the labour market and must address social policies. This requires policies and laws to protect all workers, whether in the informal or the formal economy, and to ensure compliance, instead of impunity, of anti-discrimination and living wage legislation as well as core labour standards. In addition, gender sensitive policies that take account of the constraints and the discrimination faced by women and of the unpaid care work carried out by women - must be designed and implemented.

Free trade agreements and massive tax evasion by multinational companies and others have undermined the ability of states to implement public policies that increase the income position of low-income groups, because of international legal constraints and decreased government revenues. To address economic and social inequality effectively, the post-2015 development agenda must provide an earmarked policy space for governments and social partners to define and then implement efficient policies for employment and for social transfer – at the same time as carving out public services from trade agreements.

But inequality cannot be addressed through economic and labour policies alone. The post-2015 Agenda must include a goal on the implementation of social protection floors as defined in the Bachelet Report and the ILO Recommendation 202 that sets an international standard to be applied at national level. To truly reverse growing inequality and strive to achieve equity, targets must be established for the basic social security guarantees that include universal access to essential health care and basic income security to protect standards of living when people are sick, unemployed, disabled and old, or cannot work when having to care for infants or sick family members.

PSI General Secretary Rosa Pavanelli says "The Post 2015 Development Agenda is relevant for all countries in the world. We want the UN to promote policies that will have a real impact on gender equality and social equity. Inclusion in society is the only means to the full enjoyment of all human rights and fundamental freedoms. PSI works together with all its affiliates to achieve that goal."