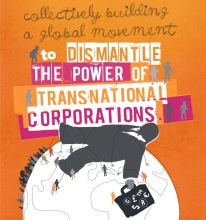 From 24 to 28 October 2016, Public Services International, together with Governments, regional and political groups, intergovernmental organizations, civil society, NGOs and many other relevant stakeholders, will be participating in the 2nd public meetings of the Open-ended intergovernmental working group on transnational corporations and other business enterprises with respect to human rights (OEIWG), which could lead to the adoption of an international legally binding instrument on transnational corporations (TNCs or MNEs).

In June 2014, at its 26th session, the UN human Rights Council adopted a Resolution by which it decided “to establish an open-ended intergovernmental working group on transnational corporations and other business enterprises with respect to human rights, whose mandate shall be to elaborate an international legally binding instrument to regulate, in international human rights law, the activities of transnational corporations and other business enterprises”. Such an instrument has the potential of reducing human rights violations on a global scale, end the impunity, and ensure access to justice for the victims.

Following its first session, which was held from 6 to 10 July 2015, the OEIWG presented its report to the HRC (please see the report A/HRC/31/50) and decided that a second session of the working group should be held in 2016, also dedicated to having “constructive deliberations on the content, scope, nature and form of the future international instrument”.

In June 2015, previous to the 1st meeting, the platform Global Campaign to Dismantle Corporate Power and Stop Impunity, an international network comprising more than 200 stakeholders, of which PSI is part, submitted a written contribution with 8 proposals related to the nature, scope, form and content of the future instrument. For the 2nd session, the platform prepared 6 points as written submissions and as a contribution to the work of the OEIGWG, which comprise the pillars to end corporate impunity and address the systemic power of TNCs.

In addition to the sessions of the OEIWG, the platform organized the Week of Peoples Mobilisation, which consists of a number of activities and side events – inside and outside the UN Palais des Nations – to ensure that the voices from impacted communities are heard, loud and clear.

A webcast of the session will be available on http://webtv.un.org/

Audio recordings of the OEIWG session will also be accessible afterwards from the UNOG Digital recordings online portal: http://conf.unog.ch/digitalrecordings/