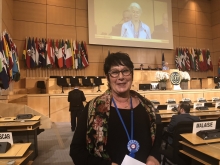 The commitment of trade union members to build a better world is stronger than ever; as greater than ever are inequality and injustice, said PSI Secretary General, Rosa Pavanelli, when she addressed the Plenary of the International Labour Conference in Geneva.

Next year the ILO will be one century old.

It would be fabulous to celebrate the anniversary with a Convention and a Recommendation against violence and harassment in the world of work, as decided on Saturday, particularly if they will consider the specific gender dimension of the problem.

Trade unions are the largest organized group of citizens globally. Our democratic organizations do represent millions of people around the world and play a crucial role in the ILO and the society.

The commitment of trade union members to build a better world is stronger than ever as greater than ever are inequality and injustice.

If we want to make sure that no one is left behind, we must be bold and say that another world IS possible.

The global system is broken. Things must change and the time for change is now.

We refute any apologetic discourse on the relevance of social partners and collective bargaining when we witness daily violations of workers’ rights.

Building coalitions with civil society organizations is key for the broad-based policy shift that we need – but it cannot be an alternative to negotiations between the key actors in the world of work nor dilute social dialogue and the tripartite system.

Since 2012 the ILO has been in crisis. At the same time the wage share in GDPs around the world continues to shrink and profits become sweeter for the happy few. Forms of workers exploitation are multiplying, hurting migrants first.

This proves the relevance of the ILO and unions for workers. Defending the ILO means renewing the vision and commitment of its founders to reduce inequalities and build social stability, peaceful and democratic societies for the next hundred years.

Public services play a central role in defending human rights and achieving sustainable development, and states are the responsible. This needs to be a cornerstone of the future of work and reflected in next year Conference.

While the low level of ratifications continues to be worrisome, PSI salutes countries that have recently ratified it as the Philippines. Convention 151 goes hand in hand with Convention 98. The right to organise must go along with the right to collective bargaining and the right to strike.

Despite the willingness of some countries, such as Liberia, to take steps forwards, public sector workers in many countries continue to be denied the right to organise, particularly in emergency services. PSI encourages the ILO to support the introduction of social dialogue in the public sector as a priority.

Transparency and fight against corruption require protection of whistle-blowers and an international labour standard is urgent to support the national legislations that are starting to address the problem.

The ILO mandate cannot be weakened and its role in development has to look beyond the global agenda.

Funding remains an important challenge – but engaging in PPPs is not the solution. This is about providing technical know-how and policy advice to make a difference for working people.

We do not want social protection coverage when it is about insurance companies selling empty promises to ensure their profit.

We need public health and the human right to health for all, as we need public education, public water and sanitation.

We do not want that the ILO becomes a promoter of PPPs – that we know do not deliver and cause long term public indebtment– but that it strengthens the sectoral activities serving the communities instead of private entities.

Multinational corporations can play a crucial role in the global economy by paying their fair share of taxes where they operate and decent wages to their workers throughout the supply chain.

To conclude, allow me to express our solidarity with the UN staff unions and deeply regret the unilateral pay cut applied to the staff of UN organizations. The ILO centenary can be the right time to recognise UN workers’ trade union rights including collective bargaining.