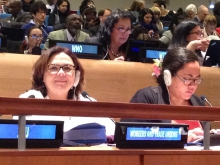 Public Services International participated in the United Nations Open Working Group on Sustainable Development Goals, which had its eighth and final stock-taking and information-gathering session 3-7 February 2014 (OWG8), in New York.

One of the main outcomes of the United Nations Conference on Sustainable Development (Rio+20), held in Rio de Janeiro in June 2012, was the agreement by Member States to launch a process to develop a set of sustainable development goals (SDGs). Rio+20 did not elaborate specific goals but stated that the SDGs should be limited in number, aspirational and easy to communicate. The goals should address in a balanced way all three dimensions of sustainable development and be coherent with and integrated into the UN development agenda beyond 2015.

This session covered Oceans and seas, forests, biodiversity; Promoting equality, including social equity, gender equality and women’s empowerment; and Conflict prevention, post-conflict peacebuilding and the promotion of durable peace, rule of law and governance. Workers and trade unions participate in these Open Working Groups as one of the Major Groups representing civil society within the UN.

There is broad recognition that a major failure of the Millennium Development Goal (MDG) framework was that it failed to address inequality adequately. Wage inequality explains a big part of income inequality, because the share of wages in total income declined over the last two decades in 70 per cent of countries, despite an increase in employment rates globally. Most of the jobs created in the last two to three decades are short-term, part-time, temporary, casual or informal, and largely precarious. A majority of these lower paid, less protected workers are women.

The post-2015 Agenda must include a goal on the implementation of social protection floors to truly reverse growing inequality and strive to achieve equity; targets must be established for the basic social security guarantees that include universal access to essential health care and basic income security to protect standards of living when people are sick, unemployed, disabled and old, or cannot work when having to care for infants or sick family members. Inclusion in society is the only means to the full enjoyment of all human rights and fundamental freedoms.

The interventions at OWG8 showed widespread support across regions for a stand-alone gender equality goal and the integration of gender-specific targets and indicators across the goals. Several issues emerged as priorities: violence against women and girls; women’s voice, leadership and participation; and women’s economic rights. Many states also expressed strong support for sexual and reproductive health and rights.

A joint statement to the Open Working Group was delivered by the permanent representative of Argentina on behalf of 48 governments, including representatives from all UN regional groupings. The statement calls for gender equality and the empowerment of women to be a priority in the new post-2015 agenda, with commitments across the range of social, cultural, economic, civil and political rights. The statement includes a call for sexual and reproductive health and rights to be a critical pillar of the SDGs and the post-2015 agenda. This reflects the position of the international labour movement.

Unions also want a goal on Full and Productive Employment and Decent Work with a specific indicator on gender equality at work. Making affiliates more aware of the on-going discussions and making sure that we reach out to all possible partners and supporters should be a priority in the coming months, while the SDGs and MDGs are being hammered out.

At the same time, we recognize the repeated references to trade issues and the impact of globalization on social development. Numerous countries and civil society organizations referred to the need to look at this nexus. The issue of new generation trade agreements not allowing countries, and in particular least developed countries, to set their own political agenda, was raised. Another hot issue was the importance of good governance for social development, especially in terms of tax collection to allow for policies that matter.

We noted numerous references to the role of the private sector in development, while at the same time governments are less willing to take up new responsibilities. Also, the role of big corporations within the UN system (Global Compact) was widely discussed.

A wide variety of side-events and workshops accompanied the official programme.