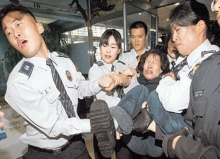 The 31st session of the UN Human Rights Council started on 29 February 2016. For a period of four weeks, the representatives of its 47 member States, elected by the UN General Assembly, will deliberate on the human rights violations in a number of countries and make their recommendations.

This news would go almost unnoticed among today’s many headlines if it were not for the fact that a country with a poor record of respect for human rights holds the presidency. This year the honour goes to Choi Kyong-lim, Representative of the Permanent Mission of the Republic of Korea to the United Nations Office and other International Organizations in Geneva, Switzerland.

While Mr. Choi chairs the HRC sessions, the President of the Korean Confederation of Trade Unions (KCTU), Mr. Han Sang-gyun, the Vice-President of Korean Public Services and Transportation Workers' Unions (KPTU), Mr. Cho Sung-deok, and other 13 prominent trade unionists are in jail for conducting trade union activities. They have been indicted with eight different criminal charges that include “special obstruction of public duty,” “special destruction of public goods,” “general obstruction of traffic,” “failure of dispersion order,” “hosting an assembly at banned place,” and “violation of article 11 of the Act on Assembly and Demonstration (Places Prohibited for Outdoor Assembly and Demonstration).” They are all awaiting trial.

At the date of 16 February, 496 trade union members and officers have been summoned with regard to the 14 November 2015 demonstration in Seoul, held in protest of regressive labor reforms that will lead to the expansion of precarious work and the worsening of rights and working conditions, especially in the public sector, and 446 are being investigated for violations of the Act on Assembly and Demonstration and “general obstruction of traffic”.

The UN Special Rapporteur on the rights to freedom of peaceful assembly and of association, Mr. Maina Kiai, stated at the conclusion of his recent visit to the Republic of Korea that he sensed a

“trend of gradual regression on the rights to freedom of peaceful assembly and of association […]. Even the courts which should always interpret laws in favour of rights have recently been moving towards restricting rights rather than expanding them.” He added that even if these rights are not the most popular for people who are not actually exercising them “they give dispossessed people a channel for engagement and a stake in society…”.

In addressing the case of the incarcerated trade unionists, he said that “organizers of peaceful assemblies should not be held liable, under any circumstances, for the criminal actions of others, as it appears to have happened in the cases of Mr. Han Sang-gyun and Park Lae-goon” (The latter is a member of the Coalition 4.16, which demands that an independent investigatory commission be set up for the Sewol Ferry incident of 16 April 2014).

Regarding the recent deregistration of the Korean Teachers’ and Education Workers’ Union (KTU) after it retained nine dismissed teachers as members, Mr. Kiai stated that “international human rights law is clear that the dissolution of a trade union should only occur in extremely serious cases, as a measure of last resort. I do not consider that the case of KTU met this high threshold”. Though it is also worth mentioning that the Korean government continues to deny freedom of association rights to other organisations, including the Korean Government Employees Union (KGEU) and the fire fighters association, FFCD.

The UN Special Rapporteur also observed that in the discussions with government he found “a palpable attitude of indifference towards the ability of workers to associate.” adding that, “the Ministry of Labour informed me that it is “neutral” towards trade unions. Yet, neutrality is not good enough under international law. The International Covenant on Civil and Political Rights (ICCPR) is clear that States must take positive measures to protect and foster the enjoyment of fundamental rights.”

The Special Rapporteur urged the government to set this as a priority and recommended the immediate ratification of ILO conventions 87 and 98, as well as rescinding the reservation to article 22 of the ICCPR, which have been repeatedly recommended by international human rights mechanisms.

PSI General Secretary, Rosa Pavanelli, who will be part of an international mission to the country in the following weeks said,

“It is a tragedy that in the 21st Century we are still witnessing such a brutal repression as the one orchestrated by the Korean authorities against its people, for conducting lawful trade union activities. A country that professes to be democratic cannot resort to practices worthy of totalitarian regimes”.

Korea is not alone in the club of countries with poor human and trade union rights compliance records that are members of the HRC. Current membership, which lasts from 1 January to 31 December 2016, also includes Algeria, Bangladesh, China, El Salvador, Qatar, Saudi Arabia and United Arab Emirates.

It was precisely the case of Saudi Arabia that attracted controversy and prompted a fierce reaction from human rights advocacy groups all around the world, when it was elected in 2013 to be part of HRC for the period 2014-2016. Not only was its election to the HRC controversial but also the manner in which the negotiations were conducted. Leaked diplomatic cables made accessible by WikiLeaks and widely reported by the media revealed the exchange of support between Saudi Arabia and the UK and how the former transferred US$ 100.000 for “expenditures resulting from the campaign to nominate the Kingdom for membership of the human rights council for the period 2014-2016.”

Oddly, this Council was reportedly established in 2006 to replace its predecessor, the UN Commission on Human Rights, following criticism over its membership and vote trading!

A few weeks ago, at the opening of the sixteenth session of the HRC Advisory Committee (a group of 18 experts that function as the “think tank” of the Council), Mr. Choi stated that “for the Council, its 10th anniversary is an opportunity to take stock of its achievements, reflect on challenges and discuss the way forward.” Maybe a way forward is to replace – yet again – this human rights body for another that once and for all has the moral standing necessary to serve its purposes.