Implementing the Right to Water in the green economy 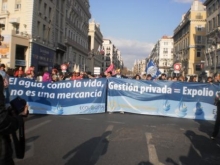 Water Justice activists, including PSI unions, have successfully pushed the human right to water and sanitation (RTW) onto the global agenda. The UN General Assembly Resolution 64/292 of 2010 has set the standard for government obligations in ensuring universal access. Many national campaigns insist that governments adopt RTW and implement universal access to water and sanitation. Unions are working with a broad range of allies at global, regional, national and local levels.

Despite this progress, a number of countries and lobby groups are pushing a market-focused agenda.

The water justice movement is pushing back – thanks to our organising over the years, we are able to mobilise.  Workers and trade unions recognise their obligations to support social justice in the sector, and we will do our best to ensure universal access to safe water and sanitation, recognising worker rights.

[1] The Green Economy concept remains unclear and controversial.  Many see corporate attempts to impose market dynamics through valuing, payment and trading of ecosystem services, including in water.  Governments should ensure social and environmental sustainability, including with Decent Work and Just Transition towards green jobs, enforceable environmental protections, and more participation in decision-making. PSI supports adoption of the Social Protection Floor and the Financial Transactions Tax proposals.  http://www.ituc-csi.org/rio-20.html

[2] This week, at UN negotiations in New York, Denmark (as chair of the EU), the UK, Canada and New Zealand are trying to remove the RTW from the Earth Summit.  Water Justice activists are mobilising against this, and G77 countries are supportive.