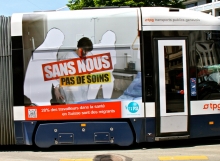 The year 2012 was the culmination of the fourth phase of the PSI Migration and Women Health and Social Care Workers Project implemented in Ghana, Kenya and South Africa in 2010-2012. The project’s objective was to strengthen the capacity of public service trade unions in addressing the causes, impact and challenges of migration by integrating responses to these migration challenges in their daily trade union work.

The outcomes: PSI unions representing health and social care workers in these countries are able to engage their governments in social dialogue on migration and human resources for health; they are reaching out and organising migrant workers; unions have increased their ability to influence national and international migration, trade and labour policies; and they are winning rights for health and social care workers.

The project’s primary strategy was to mobilise and build the evidence-base through a mapping and participatory research that documented and analysed the impact of migration on health and social care services. Around 100 union members representing 18 affiliates in Ghana, Kenya, South Africa as well as Australia and the Philippines were trained on participatory research. In total, these peer researchers conducted 1,941 interviews and 17 focus group discussions with health and social care workers, migrant workers, government agencies and professional groups. By using the research as an outreach, the unions also recruited hundreds of new members.

The research documented the main factors that push workers to migrate, such as low salaries, poor working conditions, low staffing levels, lack of job satisfaction, pressures at work, lack of opportunities for training and poorly funded health care systems. It strongly confirmed the correlation between an increase in pay and benefits and a decrease in the intention of workers to migrate. In the case of a migrant-receiving country like Australia, the research showed that migrant workers recruited under temporary working visas are vulnerable to exploitation, i.e. working long hours with less pay, and are constantly faced with the fear of being fired and deported if they join the union and/or demand for their rights. The research affirmed the important work of the unions in defending worker’s rights and in negotiating for better pay and conditions, thereby effectively reducing out-migration and brain drain.  It also set forth recommendations for action by governments and trade unions. The national research reports can be downloaded at http://www.world-psi.org/en/issue/migration.

The unions used the findings and recommendations from the research to initiate social dialogue on migration and human resources for health. They used their evidence base to bargain for pay increases and improved conditions for the workers. They established the “Migrant Desks”, which are focal points established in union offices and workplaces to provide information, counselling, organising, support services and networking for migrants and their families. This pioneering initiative was welcomed by government agencies and civil society groups dealing with migrants.

Extending the experience of the PSI migration project to Europe, the PSI secretariat worked with Mediterranean affiliates to prepare and submit a project grant application (Concept Note stage) to the ENPI-MED, a European Union funding facility. The project was aimed at building public service trade union solidarity and cooperation on migrants’ rights in the Mediterranean. The concept note was selected and PSI and the Mediterranean affiliates in Italy, Spain, Malta, Jordan, Palestine and Lebanon were invited to submit a full application for a two-year project. The result of the application will be known in mid-2013.

Finally, in November 2012, project partners and affiliates came to culminate PSI’s migration activities at a pre-Congress Migration Seminar and Workshop in Durban, South Africa. Participants at the workshop took stock of the achievements in the past five years, including the project, analysed continuing and emerging trends in international migration as supported by the evidence base generated from the project’s mapping and participatory research, and from these, developed a new Migration Programme of Action for 2013-2017. The Migration Programme of Action was then endorsed as part of the resolutions adopted by the 29th PSI World Congress.
Set against a backdrop of a deepening economic and jobs crisis, an international migration phenomenon that is largely driven by the search for decent work, a paradigm shift in favour of deregulation, privatisation, outsourcing and flexibilisation of labour, the alarming rise in precarious work, youth unemployment, racism and xenophobia and proliferation of recruitment agencies that prey on migrant labour, the Migration Programme of Action seeks to address these issues by setting forth four main priority areas. These priority areas are the basis for the formulation of the next phase of PSI’s global migration project.

The four priority areas are as follows:

In order to implement the migration programme of action, PSI and its affiliates will be carrying out in 2013: (1) an external and participatory evaluation of the previous phase of the project and (2) a planning process involving project partners in order to build the next phase of the PSI global migration project.