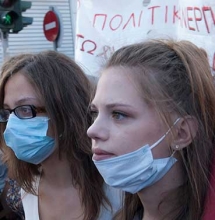 A report from the Greek general strike, 18 October 2012

“The fires here in Greece are spreading all over Europe.” Leading into the 18 October general strike against the Greek government’s budget cuts, Ilias Iliopoulos, the general secretary of ADEDY, the public sector union confederation, is defiant.

He says that Greek civil servants face 150,000 potential job losses within the next three years because of the government’s austerity policies. He feels the discontent being voiced on Greece’s streets is being echoed across Europe.

Unions estimate that over 200,000 people attended the demonstrations in Athens, Thessaloniki and other cities in Greece.

The press reports that Greek ports were shut down, hospitals were responding to emergencies only, ministries were closed, public transport was open only for part of the day (to get protesters to the march in central Athens), shops and businesses were shut across the country and air traffic controllers were also on strike. Traffic was light in Athens and the centre was blocked by many thousands of demonstrators.

This was the second general strike in a month in Greece. It was called by the two main union confederations, ADEDY for government staff and GSEE for private employees.

Greeks are fighting against cuts in social benefits and employment, and further austerity forced on them by the ‘troika’ – the European Union, the International Monetary Fund and the European Central Bank. The ‘troika’ is currently negotiating with Greece over 13.5 billion euros of cuts in the Greek national budget. While the country was shutting down, Antonis Samaras, the Greek Prime Minister, was at an EU summit in Brussels, where he said with considerable understatement: “People will have to suffer.”

Ilias Iliopoulos lists the results of the policies of austerity in Greece: two million people unemployed (out of about seven million people of working age); thousands of small businesses closed and continuing to close; 17 per cent of the population living in poverty; and about 500,000 families surviving without any income at all – “not one euro per month.” At the same time Greek debt is increasing instead of decreasing.  He contends that the government is trying to sack public servants in order to make the public sector ready to be cut up and sold in sections.

But he points out that the flames of discontent in Greece are spreading in demonstrations and action all over Europe, with unions working together to fight the policies of austerity. He adds: “The message from the people is: the food, the energy and the water that they [the authorities] want to come and get from us; it will not happen because the people have the strength.” The Greek government does not have the right to sign away these things, he insists.
During the demonstration, Dimitris Zervas, a paramedic from the National Centre for Emergency Care (EKAB) who is also a volunteer fire-fighter in his free time, explains why he and his colleagues are on strike and protesting in Syntagma Square: “It is the ‘troika’. Wages are cut. Overtime is not paid. They have not paid overtime [that is owed] from December 2011, also in March, July and August.”

One of his colleagues interrupts fiercely: “Salaries have already been cut by 30 per cent. I take home 900 euros with two kids…We Greeks want to be in Europe, but how?”

Dimitris Zervas explains that because of the cuts, ambulances are being run for very long mileages, so requiring extra maintenance which reduces availability. In Athens they should have one ambulance for 25,000 people; the real figure is one ambulance for about 70,000 people. This means dangerous delays for patients of up to half an hour.

Later, as the demonstration winds down, a young science graduate demonstrator speaks bleakly in the emptying square: “We have no hope. There will be no change if the people have no hope. We have students who don’t have work. We are living with our parents. My salary is 300 euros [per month]. After six months without being paid, I was paid 300 euros… We don’t have a future… We need to strike together [lawyers, doctors and engineers took action the day before]. I am embarrassed at the small turnout. We need three million people here.”

The interview is abruptly halted by a gust of teargas which sends all of us rushing away, coughing and reaching for Maalox (a liquid antacid used to dull the effect of teargas) to pour onto our stinging faces. We had foolishly removed our gas masks to talk, feeling safe as the demonstration appeared to be ending.

On the day of the strike a news website reports Joseph Stiglitz, the Nobel prize-winning economist, as saying: “Spain and Greece are in depression, not recession. That impact was brought about by austerity.”

In relation to the sackings of the public sector workforce, the Organization for Economic Co-operation and Development (OECD) stated in a 2011 report: “Greece has one of the lowest rates of public employment among OECD countries, with general government employing just 7.9 per cent of the total labour force in 2008.”

But the troika is demanding more austerity and more public sector job cuts as part of the package of 13.5 billion euros cuts in the national budget.
Those who would blame the Greeks for the crisis they are enduring, need to ask themselves what austerity really means in Greece. Those who wish to express solidarity should consider sending a delegation from their organisations to support the Greeks in their next general strike.
It is going to be a long hot winter in Greece.

A special report for Public Services International by Tim Baster and Isabelle Merminod.