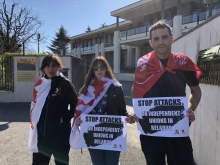 PSI joined a solidarity action organized by IndustriAll, and the International Trade Union Confederation (ITUC), who expressed their concern about a new wave of serious violations of fundamental labour rights in Belarus. The unions, representing more than 200 million members, call on the Belarus government to stop persecuting independent trade unions and fulfill their ILO obligations.

Protest against the persecution of independent trade unions in Belarus

In a day of action in solidarity with the independent trade unions in Belarus, the global unions protested in front of the Permanent Mission of Belarus to UN in Geneva. The delegation was invited to meet the Ambassador, Yury Ambrazevich, and to deliver a letter addressed to President Lukashenko.

The meeting lasted approximately 40 minutes, and the Ambassador listened carefully to the case made by the union representatives.

The Ambassador was initially hostile, and disputed the union version of events. He asserted that the state of Belarus had the right to pass any law it wanted, that citizens were required to obey the law, that the independent unions had violated the law, and that due process was now underway. External organizations were violating the sovereignty of Belarus by interfering.

A tripartite labour system in Belarus?

The Ambassador then conceded that Belarus wanted to move towards a multilateral system with social dialogue, possibly including a tripartite labour relations system including representatives of the independent unions.

He implied that the state did not have suitable partners for this endeavour because of unions refusal to act responsibly.

The Ambassador then requested international unions to support Belarus in asking for ILO technical assistance to build better industrial relations capacity to develop a tripartite system and more effective communications channels with unions. By providing practical support and working together, we would achieve the desired outcome more quickly.

The meeting ended with both sides failing to agree on the nature of the dispute, with the Ambassador insisting that the union version of events was a partial and distorted picture. However there was at least a verbal commitment to work towards a better labour relations system.

About the sitation in Belarus: