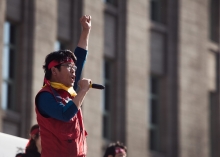 Han Sang-gyun, former President of the Korean Confederation of Trade Unions was released from prison on May 21. PSI warmly welcome the jailed ex-president back to the movement as an organizer.

Han has decided to serve the union to bring an end to the social inequality and to build a society where all workers can exercise trade union rights without any repression. He expresses his ambition for the future:

I will be one of the numerous organizers who work with unorganized, low-paid and precarious workers to increase union density up to 30% and union membership up to 6 million. I hope to get older seeing the future generation who would be proud of being a worker.

For several years, PSI has been working together with the affiliate to release Han.

On May 21, KCTU ex-president Han, Sang-gyun was released on parole, after serving 2 years, 5 months and 12 days in prison on charge stemming from protesting the corrupt Park Geun-hye government.

In November 2016 one million people got together in another peoples’ mass mobilization, which led up to the massive candlelight movement.

The new government under President Moon, which was elected from the ‘candlelight movement’. They spent one year and 12 days before deciding on the parole. At the time Han had only 6 months and 20 days left to serve in prison.

Han: Will not blame the Government

Han, Sang-gyun wrote from the prison, when he was excluded from the presidential pardon last December, saying:

I haven’t expected to be pardoned and I don’t want to blame the Government. However, if such a society is made not by the power of unity of our own, it is merely a mirage.

It's still unclear on what ground he had to spend almost three years in prison. At that time the police and the prosecutors tried to apply for a sedition charge against Han, insisting that he caused a social disorder.

Arrested for hosting a mass mobilization

What Han really did was organising a general strike to stop the regressive labour reform driven by Park’s government, hosting 130,000 big mass mobilization against the anti-democracy and anti- labour government, and crashing through the bus barricades which were illegally installed to hide the truth of the Sewol Ferry disaster.

Former General Secretary of the KCTU is still under detention

The right to peaceful assembly and demonstration is not a crime in South Korea. It is no longer justified to imprison someone who violate the existing laws to protest against the unlawful and violent government. Lee, Young-joo, the ex-general secretary of the KCTU who is under detention for the same charge, is waiting for a jury trial which will be held later in June, 2018.

PSI  will monitor the trial to see whether or not the court rewrite the justice. 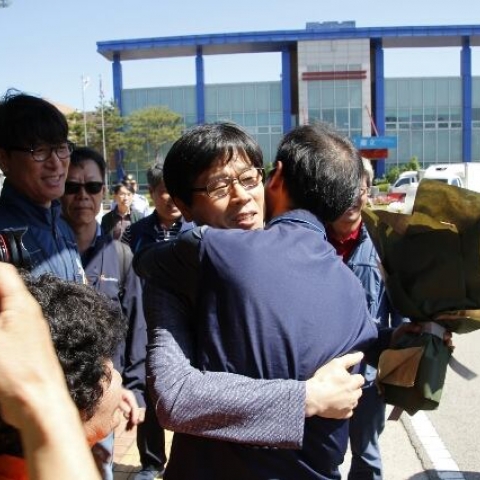