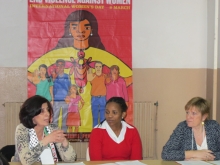 This workshop, organised by PSI and its affiliates at the World Social Forum in Tunis, explored how trade unions around the world are supporting the empowerment of women and making gender issues and women more visible and effective in their organisations and in society. Special attention was given to pay equity policies and actions to end violence against women.

Anne Demelenne, Secretary General of FGTB (Belgium) spoke about how discrimination is still gendered in language, giving the example of someone is titled “a cleaning woman, but the man is called a cleaning manager. Or, a man is called a director of a department, while a woman is called a coordinator.” In Belgium there is still a 22% wage gap between women and men. FGBT fights for the inclusion of women on executive boards, and for better work/life balance so that women can include family needs. At the same time, the union is fighting austerity measures which are cutting public services that employ and support women.

Juneia Batista, CUT, noted that the current leader of Brazil is a woman, who used to be a guerrilla fighter. “Women are interested in working in public services, and this work should also provide decent work at a decent wage. Housing rights are given to poor women, along with electricity and agricultural subsidies, and access to post-secondary education. A new law has been introduced in Brazil to allow a man to be charged with domestic abuse, without requiring his wife to denounce him.”

Mercedes Landolfi, of FILLEA CGIL (Italy), said: “I’ve been travelling around the world and talking with women and the conclusion is that we share the same issues. We must work together across our cultures to fight discrimination against women. Everyone has the right to live in peace in their own country, following their own religion and culture, but no religion or culture can deny their economic and social rights.”

Ms. Kabaso, from the Zambia Social Forum, spoke on behalf of the women’s movement in Zambia. “We face a lot of challenges in terms of lack of representation of women in law and parliament. Rural women face many problems, such as lack of access to clean water and basic social services. Most families prefer to educate the boy child, because the male is supposed to a leader. There are many instances of girls being forced into marriage. We have forced the government to enact legislation on gender-based violence, but the law is not fully implemented. We want a constitution that includes women’s rights in the Bill of Rights. We want this constitution to be enacted by a referendum of the people. For the first time last week we have a woman elected as a tribal chief, and she is a good advocate for women’s rights. In the past, girls who’d had children were not allowed to return to school, but this practice has changed.”

Jeane-Pierre Kimbuya, Secretary General of COSSEP/UFF (Congo/RDC) said, “It is essential that women have their full social and economic rights and be able to engage fully in democratic processes.  Women are now working in the public sector and have better access to education, but there has been a huge increase in violence against women because of rape and war. Most real formal jobs go to men, while women are working in the informal workforce and the markets, even to the degrading level of poor women hiring themselves as beasts of burden. Until recently women could not get a job without permission from their husbands. Our trade union is developing strong policies working with Canadian unions to increase women’s education and participation in the labour market. Also now 28% of our union leadership is female.  We must work on equality together.”

Yamina Maghraoui from the independent union SNAPAP (Algeria) said, “It is thanks to the work of our union SNAPAP that 30,000 women now have permanent jobs in education. In 2011, women threw themselves under police buses to prevent police from hauling away peaceful protestors in the middle of the night. Women in precarious work have no way to protect themselves.”