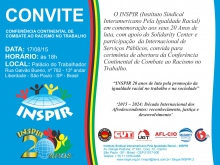 African descent union leaders, indigenous and non-black allies in the fight against racism in Brazil, USA, Colombia, Honduras, Ecuador, Chile, Guatemala, Guyana and the Dominican Republic will attend the event.

Continental Conference on the Struggle Against racism in the Workplace

6pm – 9pm Opening of the Continental Conference and a tribute to INSPIR on its 20th Anniversary ,at the Palácio do Trabalhador Auditorium, Rua Galvão Bueno, 782, Liberdade, São Paulo/SP.

- Playing of the Brazilian, American and Afro-Brazilian Anthems;

- Exhibition of the institutional video of INSPIR;

- Speech by Francisco Quintino, President of INSPIR – “Challenges for the fights against racial discrimination in the Americas in the current political and social context”;

- Presentation of the Commemorative Plaques “20 years of INSPIR” to the former Presidents of INSPIR and Presidents/General Secretaries of the affiliated trade union centres as well as the Inspir affiliated Unions and Associations.

8am – 9am: Accreditation of Participants

9am – 9:30am: Opening of the event (by Francisco Quintino, President of INSPIR/FS and Jana Silverman, Deputy Secretary-General of INSPIR-AFL-CIO), presentation of the program and the participants.

9:30am – 11:15am: Round table 1 – “Racism, historical inequalities and affirmative action policies in the Americas” – Prof. Fernando Urrea of Universidad del Valle, Colombia; Wilson Roberto Prudente, Federal Prosecutor of the Public Ministry of Labor of the 1st Region; and Jos Williams, Secretary General of INSPIR and Executive Director of CBTU-AFLCIO. Commentator: Jana Silverman and Moderator: Francisco Quintino.

2pm – 3:45pm: Round table 2 - “Afro-Descendent Youth, violence and social exclusion” – Ângela Guimarães, Deputy Secretary of the National Secretariat of Youth of the Republic Presidency, to speak on the program “Juventude Viva”; Jefferson Tiego, CSA´s Youth Representative for Força Sindical to speak on Young Workers in the Americas; and Fred Redmond, CBTU-AFLCIO/INSPIR Executive Director to speak on the campaign “Black Lives Matter”. Commentator: Gutemberg Guedes and Moderator: Yara Pereira from INSPIR/FS.

8pm – Dinner at the hotel

9:30am – 11am: Round table 4- Campaigns against racism in the Americas – Kika Silva, member of the National Impeller Nucleous of the Black Women´s March of the State of São Paulo; Representative of PSI´s Anti-racism Committee (Campaign for OEA´s Conventions A-68 and A-69 ratification); Nilma Lino Gomes, Ministry of State and Chief of SEPPIR/PR; Juliana Wenceslau Biriba dos Santos, from the Program of the United Nations for Development – PNUD Brasil (International Decade of the Afro-descendents: Recognizing, Justice and Development). Commentator: Rosana Silva INSPIR/CUT and Moderator: Carolyn Kazdin, Representative of the AFL-CIO.