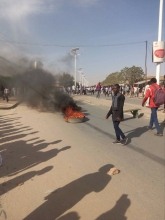 Workers across public services in Chad have launched a general strike to protest against the government’s austerity measures.

Teachers, nurses and public administrators joined the strike after the Chadian government unilaterally cut their pay this month. Last year, many public workers went for months on end without receiving their salaries: an issue which was only resolved after a long-fought union campaign.

The unions assured the public that they would maintain a minimum level of service in essential sectors including public transport and healthcare.

A reunion of teachers at the Federation of Chadian Trade Union's Headquarters burst into song to highlight their frustrations, singing:

Over 100 people were arrested as workers, joined by students, protesting in the streets were met by anti-riot police.

“The strike is largely followed all across the country, according to the response we have had,” reported the President of the UST, Barka Michel.

Rising costs for  petrol prices`and basic goods as well as the imposition of drastic austerity measures have led to a wave of protests against President Idriss Deby who has been in power since 1990.

At a special assembly, the Chadian Order of Lawyers denounced the regime's "brutal and unjustified increase in fuel prices, unilateral and suicidal cuts in wages, as well as the systematic ban and repression of peaceful demonstrations."

In 2017, PSI sent a letter to the President denouncing cuts to healthcare services and calling for workers to be viewed as key actors in the realisation of the country's development.

Unions have highlighted how austerity policies could be avoided if the government took a firmer stance against corruption, which has plagued the country's finances for decades.

A process of reform, which the government claimed would update the constitution and state institutions, has been largely rejected by civil society and unions who claims Deby’s regime maintains a firm hold over the process and is failing to respect social dialogue.