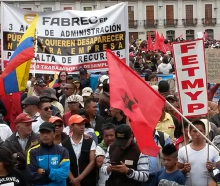 The United Collective of Workers, Social and Indigenous Organisations of Ecuador held a national strike on 13 August to demand the Ecuadorian government to rectify their restrictive rights policy. Since then, trade unions and indigenous and civil society organizations have continued to demonstrate in Quito, the Amazon region and the south of the country.

PSI affiliates have demanded President Rafael Correa to release all detainees, to remove totally and definitively the draft constitutional amendment and to restore all rights that have been violated.

PSI affiliates in Ecuador: FME-CMP-FAITH-CONASEP-FENAJE-FENASOUPE-FETRALME-FETMYP-FENOCOPRE-ANTAPS-CETE have been involved in this struggle. Since 2009 they have proposed several alternatives to the government, none of which has been taken into account. In 2015, the National Assembly continued in its policy of rights violations and approved a proposal for amendments to the Constitution that will definitively eliminate freedom of association in the public sector.

PSI has sent a letter to President Rafael Correa, seeking to initiate a process of restoration, repair and respect for the rights of the workers, especially in the public sector.

PSI also requests that all affiliates send a letter (attached for download) to President Rafael Correa, denouncing the conditions public sector workers have had to endure for the last eight years, and the danger of the Ecuador/EU trade agreement resulting in further privatization.

The letter mentions the following issues:

The letters call on President Correa to enter a process of restoration, repair and respect for the rights of workers in general and in particular the public service. They also call for transparency of all documents pertaining to the signed trade agreement between Ecuador and the European Union which are now pending ratification by the parliaments.

Please send a copy of your letter to rights@world-psi.org.