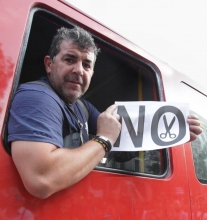 Launching the Annual Growth Survey in November, European Commission President José Manuel Barroso told us: “The return of growth shows that our policies are working. That is why, in this year’s Annual Growth Survey, we keep the same five priorities as we had last year.” And a year earlier he said: "It is crucial to stick to our strategy of growth-friendly fiscal consolidation, economic reforms and targeted investments. This is the only way to restore confidence and create lasting growth.”

So austerity is still with us but has it really managed to “restore confidence”. In a new briefing published by EPSU (www.epsu.org/a/10128) the arguments of the Commission are analysed and found wanting – rather than any beneficial effect on confidence, the opposite is the case: Austerity makes matters worse by undermining confidence.

Those promoting austerity argue that businesses and households will be more confident if public sector debt and deficits are reduced and there is a prospect of future tax cuts. The briefing argues that this totally ignores the role of the public sector and cuts in social expenditure that fundamentally increase insecurity in society, resulting in excessive precautionary savings.

Secondly, the advocates of austerity tend to forget that our economies are still suffering from a deep financial crisis. And as the briefing maintains: “in such a situation it is rather ridiculous to claim that households will bridge the gap between current and future income by massively taking up credit from the banking sector.”

The briefing also tackles the need to reassure the financial markets. Using data from the International Monetary Fund, it makes clear that austerity has an immediate and strong negative impact on the economy, bringing down growth and actually undermining rather than boosting financial market confidence.
EPSU deputy general secretary Jan Willem Goudriaan commented: “The austerity and confidence myth of the Commission is profoundly debunked by our evidence and arguments. These show that austerity has spectacularly failed and that, in the lead up to the European elections we need to promote serious alternatives, like the ETUC’s investment plan for sustainable growth and decent jobs.”

EPSU foresees five briefings on austerity and the alternatives: this is the second; the first briefing, The failure of austerity, explaining how austerity has failed, was published at the end of October 2013: www.epsu.org/a/9840. A further three briefings will be published over the coming weeks. The third and fourth briefings will examine the structural reform agenda and the twin fairy tales of workers being paid wages beyond productivity and the lack of sufficient labour supply. The final briefing will document how banks and the corporate sector are being generously supported by public policies while austerity is being imposed on the rest of us.