The Arab world, a place of hope 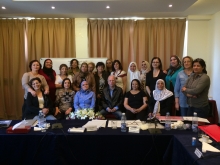 Women leaders of unions affiliated to PSI in the Arab countries of Algeria, Egypt, Lebanon, Morocco, Palestine and Tunisia attended a two-day seminar to discuss the campaigns that form part of the project sponsored by the LO-TCO and PSI to increase the participation of women in the trade unions.

Expressing their best wishes to the women of the entire world who suffer gender-based violence or any other violence at the hands of extremism, state terrorism, exclusion, exploitation and sending a message of solidarity to the Tunisia Workers’ Confederation in response to the attacks on 25 November, women leaders of unions affiliated to Public Services International (PSI) in the Arab countries of Algeria, Egypt, Lebanon, Morocco, Palestine and Tunisia attended a two-day seminar to discuss  the campaigns that form part of the project sponsored by the LO-TCO and the PSI to increase the participation of women in the trade unions.

Participants concluded that, notwithstanding the persistence of the structural and historic causes determining their subordination, women have taken various positive steps forward, including the adoption of parity and quota policies that have made it possible for women to occupy the front line of the struggle and take part in decision-making. Women’s participation has also contributed to a qualitative improvement in the independence of trade unions and made them more democratic.

Participants committed themselves to continuing the national and international fight against gender-based violence in the years to come and to strengthening the unions, which are resisting government attempts to control and selectively eliminate them and the social movements that emerged in the Arab Spring.

Finally, they declared that no extremist attack, act of violence or intimidation will weaken their commitment or interfere with their defence of democracy, equality, social justice and that many more Springs will happen in the future.