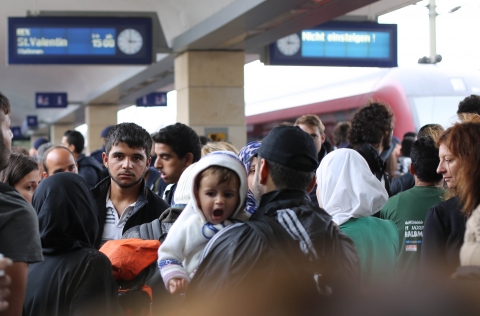 “The world today faces an escalation of human displacement, with millions of people forced to leave their homelands as a result of conflict, human rights violations, violence and climate disasters,” says Rosa Pavanelli, General Secretary of Public Services International.

According to the report of the UN High Commissioner for Refugees, in 2014, an estimated 59.5 million people were forcibly displaced worldwide due to conflict and violence. This is a dramatic increase from previous years and the figures are expected to rise as conflict continues in many parts of the world, particularly in the Middle East and North Africa.  Syria alone has generated 7.6 million displaced people and 3.88 million refugees at the end of 2014. This is followed by refugees from Afghanistan, with 2.59 million, and Somalia with 1.1 million.

Alarmingly, over half of the world’s refugee population are children. While a majority of these refugees are hosted in camps along neighbouring countries, a substantive number of them have taken on dangerous routes to seek protection in Europe. According to the International Organization for Migration, in 2015, 809,266 people have travelled to Europe through various transit routes across Africa, Asia or the Middle East. Many have lost their lives crossing the Mediterranean Sea and those who managed to cross are stuck at Europe’s borders, many were received in the reception centres and others were given protection.

Public service workers are at the frontlines in these situations of migrant and refugee flows, delivering public services such as emergency response, registration, security, food, shelter, health care, child care and social services. Together with local authorities, they provide the services that are critical for the well-being and integration of migrants, including providing education for the children, social care, job-placement, and skills training, among others.

“On International Migrants Day, we call for unity and solidarity as we deal with people on the move, may they be migrants, asylum seekers and refugees, including those who are internally displaced. We need to transcend the rhetoric of fear of migrants and fight xenophobia and intolerance. These people have fled from violence and they need our protection and support.  Moreover, States must abide by their obligations in international human rights and humanitarian law in providing coherent solutions to migration and asylum. The UN Migrant Workers Convention and the ILO Conventions on Migrant Workers C97 and C143 provide the rights-based framework for the protection of the human rights of migrants. The 1951 UN Refugee Convention is the global instrument for the protection of refugees. States must respect these obligations,” emphasizes Pavanelli.

"It is deeply shocking that EU governments continue to fail to implement EU principle of solidarity. There is a lack of funding for local authorities to provide shelter to people fleeing persecution, war and poverty,” says Jan Willem Goudriaan, General Secretary of the European Federation of Public Service Unions. “We have a reception crisis due to years of austerity that have left public services under-resourced, under-staffed and unprepared. Regions in the south and east of Europe continue to be left shouldering most of the influx of new arrivals. It is time to walk the talk. We need solidarity between EU Member States. The EU can and must deal with this.”

“At the same time, we are concerned about the serious impact of climate change in displacing communities,” says Pavanelli.

It is estimated that if carbon emissions and factors contributing to climate change remain unabated, more disasters such as storms, floods, wildfires, drought and desertification, landslides, and many other calamities will occur, which could potentially displace more than 200 million people by 2050.

“These climate changes, compounded by competition over dwindling resources such as food, water and fuel, contribute to increasing conflict and further displacement. Climate change, conflict and movements of people are intrinsically linked. Together with addressing migration, we must also address the root causes of forced migration, such as the questions of economic, social and sustainable development, democracy and peace,” says Pavanelli.

“In view of the outcome of the UN Climate Conference this year, we need to pressure national and local governments to accelerate the move to zero carbon societies, using their legislative, financial, executive and regulatory tools to make the necessary changes.  Unions and civil society must help create the political will, as a counter to the powerful corporate lobbies.  In the zero carbon transition, we insist on Just Transition to sustainable jobs and support building resilience of our communities to climate change. Public infrastructure and services are crucial in developing mitigation and adaptation strategies.  We must reverse the neo-liberal policies that lead to poverty and exclusion, including putting a stop to austerity," adds Pavanelli.

“In the midst of population displacements that are occurring worldwide, the role of quality public services in welcoming migrants and refugees in our societies is crucial.  Well-funded and publicly delivered public services are indispensible in building resilience and preparedness of our communities as we address the challenge of climate change,” concludes Pavanelli.